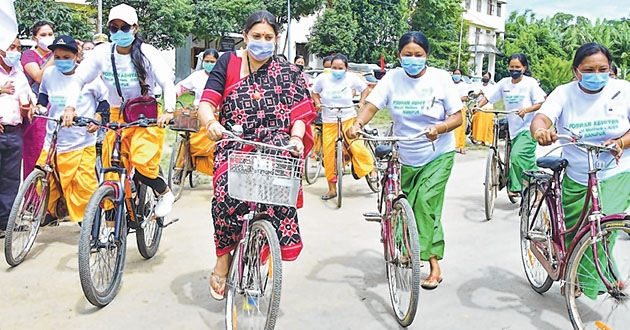 By Our Staff Reporter
IMPHAL, Sep 12: Union Minister of Women and Child Development Smriti Zubin Irani has called upon all BJP workers to exploit social media lawfully in order to strengthen the party.
Smriti Irani who arrived here yesterday was accorded a warm reception at the Nityaipat Chuthek office of BJP Manipur Pradesh today where she interacted with the party’s office bearers and workers.
BJP Manipur Pradesh president A Sarda, Rajya Sabha MP Leishemba Sanajaoba and BJP’s Manipur and Nagaland organisation secretary Abhay Kumar Giri were present at the function, among others.
Speaking at the gathering, Smriti Irani claimed that citizens can now learn through social media about all the welfare and development schemes initiated by Prime Minister Narendra Modi.
Stating that almost 80 per cent of the total population of India now use social media, the Union Minister exhorted BJP workers to exploit social media constructively in order to strengthen the party.
Appealing to all BJP workers to abide by the party’s rules and principles, she reminded that BJP’s foremost principle is always ‘Nation first’.
Prime Minister Narendra Modi has distributed food grains to a large section of the society amidst the woeful condition caused by the COVID-19 pandemic. The Prime Minister has also transferred money to bank accounts of a large number of women who had opened bank accounts with zero balance, said the visiting Union Minister.
A Sarda described Smriti Irani as a key leader of BJP who has been working for the party since a long time back.
She is a leader who has been working tirelessly for the cause of women, weaker sections and differently abled persons, Sarda said of Irani.
Later, the Union Minister left Imphal for Delhi.