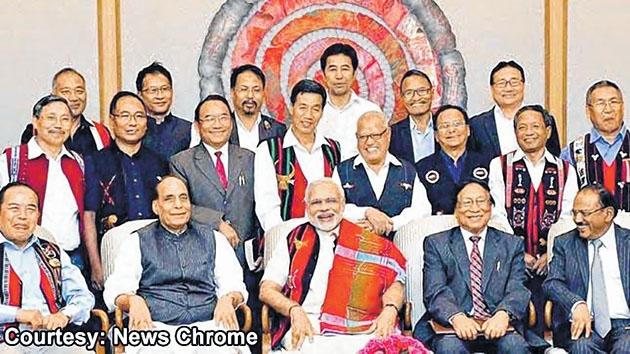 DIMAPUR, Sep 11
Former Special Director of Intelligence Bureau (IB) Akshaya Kumar Mishra is likely to be appointed as the Interlocutor for Naga peace talks.
Sources familiar with the development told East Mojo that Mishra is the “choice” of the Ministry of Home Affairs (MHA) to replace RN Ravi as Interlocutor for Naga peace talks.
Mishra, a 1987 batch Indian Police Service (IPS) officer of the Rajasthan cadre, retired in June this year and is posted as an advisor in the MHA, sources said.
Meanwhile, there are also reports that Arvind Kumar, Director of IB, is likely to join Mishra as additional Interlocutor for the Naga peace talks.
It is no secret that the role of RN Ravi was not been liked by NSCN (IM).
Despite a Framework Agreement signed in 2015, the Government has not been able to ink a final pact. The NSCN (IM) holds RN Ravi, who has refused to budge from his standpoint of not allowing a separate flag and Constitution for the State, culpable for the delay in hammering out the final solution for the protracted issue.
The Union Government, however, is yet to notify if Ravi is to be replaced as Interlocutor for Naga peace talks.
A 1976 batch IPS officer of Kerala cadre, Ravi was appointed as the Interlocutor for Naga peace talks in 2014 and took charge as the State’s 19th Governor in 2019.
He was recently relieved of his position as Nagaland Governor as the Centre transferred him as the next Governor of Tamil Nadu and assigned Assam Governor Jagdish Mukhi to hold additional charge for the State of Nagaland.
The development comes after the State Government’s recent move to form an Opposition-less Government on the pretext of the Naga political issue, following which Nagaland Chief Minister Neiphiu Rio and State Ministers met with Union Home Minister Amit Shah and BJP Central leaders in Delhi.
On Wednesday, Centre and NSCN (K) Niki Sumi group also entered into a ceasefire agreement for a period of one year.
With the recent developments, it still remains to be seen in which direction the long pending Naga political issue is headed.                East Mojo