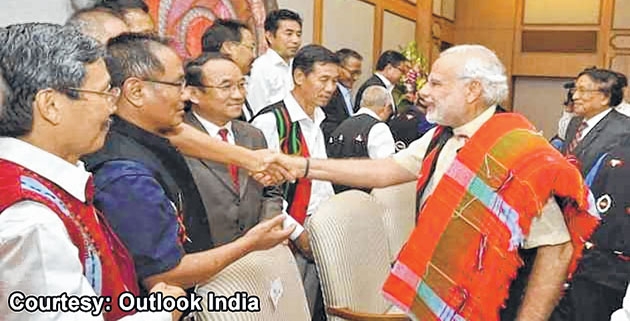 By Our Staff Reporter
IMPHAL, Sep 12 : Questioning the motive of the Government of India signing ceasefire agreements with its surrogate factions, the NSCN (IM) has said that "Naga Political" issue is one and there will be only one solution.
The outfit in a press release said that the Government of India (GoI) has gained notoriety for over indulgence in duplicitous dealing that comes in the role of scheming villain to kill the Naga issue by keeping the Nagas divided.
The world is however, not blind and keenly watching the dramatic political situation in Nagalim (Nagaland). Certainly, the world is also taking cognizance of the political wisdom of the political leaders of India who are steering the political talks with the leadership of the NSCN, the one and only authentic political organization of the Naga people which have agreed to start the political dialogue on the basis of mutually agreed points-talk at the highest level, without any conditions and in third countries, it said.
In the subsequent talks, with better understanding of each other’s position and respecting the historical and political rights of the Naga people, an indelible milestone was achieved when the historic Framework Agreement was signed on August 3, 2015, the outfit noted.
The agreement clearly reflects the unique history of the Nagas, sovereignty of the people and shared sovereignty of the two entities. Significantly, the agreement put the hope of the two people on a high level for a durable solution and peace in the land, it said.
However, what has caught the attention of the keen political observers, beside the NSCN, is the deceitful dealing of the Government of India in signing ceasefire agreement after ceasefire agreement with its surrogate factions. Such a double dealing of the Government of  India only generates doubt on India’s sincere commitment, it said.
The Naga political issue is not something to be displayed in this deceptive manner before the world. The issue is one and there will be one solution, it said.
One may deceive a few cronies but ultimately one can never deceive the people. One may bribe a few corrupt people but one can never find the way to bribe the bona fide revolutionary people, it said.
Maintaining that one can never twist history to dilute the God’s given Naga political issue, the outfit questioned whether the Government of India will enter into agreements with other people also on Naga political issues in the name of stakeholders.
It will simply be a breach of trust and making a mockery of the  Naga issue, it said while adding that what is critically important for the Government of India at this stage is to reaffirm its position and commitment on the Framework Agreement.
The Government of India and NSCN have come a long way negotiating for the Naga solution that is honourable and acceptable to both the parties. No matter how complex, there is no running away, it noted.
Both the parties must go deep into the crux of the problem with mutual respect and commitment. It would be a wrong step for the Government of India to complicate the Naga issue by taking pleasure in going for many agreements under false pretext which bears no political meaning towards the Naga solution, it said.
No amount of agreements will bring a solution if it is not issue-based. Importantly, talking for solutions is meaningless and a waste of time if it is not with the mandated organization that holds the trump card, it added.
In this world of political conflict, the solution is to be materialized through the work of people’s mandated organization or Government, and never in the hands of the collaborators, it said adding that history clearly says that collaborators have no room in it.
NSCN is of the firm conviction that both the parties have much to gain from the Framework Agreement and it will stick to it in any eventuality, the outfit added.