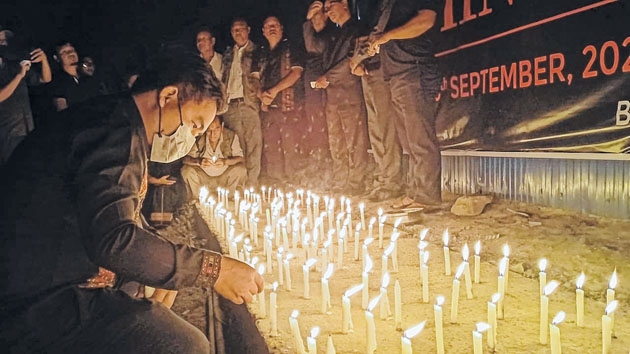 Our Correspondents
KPI/TPL, Sep 13: 'Kuki Black Day' was observed in various parts of the State on Monday by hoisting black flags.
Kangpokpi
Sahnit Ni, Kuki Black Day observance saw Kangpokpi town donned in black on Monday as black flags were seen hoisted up in all bazar areas, along National Highway 2, and in every residential house of the town.
According to the Kuki Inpi Manipur, on September 7, 1995, a meeting was held under the aegis of Kuki Inpi Manipur to observe September 13 as Sahnit (Black Day) for the victims of the alleged NSCN-IM ethnic pogrom, which resulted in the death of more than 1000 innocent Kuki civilians, uprooting of 360 villages and displacement of more than one lakh Kukis between the year 1992-1995, as the case has not been settled till today as per Kukis’ customary rites and practices.
As instructed by Kangpokpi Town Committee and following the guidelines of Kuki Inpi Manipur, Kuki Black Day was observed as a 'Mass Prayer Day' for the Kukis.
There was a strict restriction on any individual or persons moving out of home or travelling outside except for participation in the Black Day programme while working in farms or fields has also been strictly restricted.
As instructed, everyone was seen wearing black clothes and black flags were also seen hoisted on the roof of all the Kuki houses.
All shops and business establishments were closed for the day and movement of vehicles was also low.
Besides, two giant banners which read "Kuki Black Day" in red colour were put up alongside the road at IT Road and Kangpokpi main bazar under the aegis of Kangpokpi Town Committee, Kangpokpi Women Welfare Organization and Kangpokpi Youth Union.
A candlelit service led by KTC, KWWO, and KYU was also held in the afternoon to pay tribute to the departed souls at Rotary Club Waiting Shed near Brig M Thomas Ground, Kangpokpi.
Sahnit Ni, the Kuki's Black Day was also widely observed in all Kuki-dominated areas of Kangpokpi district with similar observance.
SENAPATI
The Kukis in Chingdai area under the aegis of Chingdai Area Kuki Youth Organisation (CAKYO) also observed the 28th Kuki Black day on September 13.
Pamphlets which the slogans, "Respect innocent lives, "Your lost-our lost", "lest we forget", "we forgive but won't forget", "book the culprit", "we are with you-the bereaved", were displayed.
Hoisting of black flags, prayers at Church, closing of every business establishments within the jurisdiction of Chingdai area marked the occasion.
TENGNOUPAL
The 28th 'Kuki Black Day' was also observed on Monday at HTC Moreh, Conference Hall.
Community leaders of Moreh including Tamil Sangam, Manipuri Muslim Council Moreh, All Community Development Organization Moreh and Gorkha Samaj took part in the programme.
Speaking on the occasion, Jangmang Haokip, president HTC Moreh stated that the Kuki Black Day is observed this year for peace and harmony.
"It is sad and unfortunate that even after 28th years, the Government of India had been largely unresponsive to the demand for justice of Kuki genocide victims", he said.
Meanwhile, in line with the observance of Black Day, all business establishments in Moreh bazar halted their activities on the day.