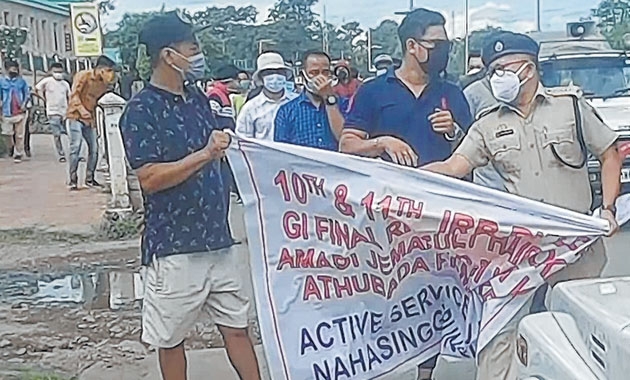 By Our Staff Reporter
IMPHAL, Sep 14 : Imphal West district police foiled an attempt of 10th and 11th Indian Reserve Battalion (IRB) aspiring candidates to storm the Chief Minister bungalow demanding completion of pending recruitment process at the earliest.
The candidates under the banner of a JAC- "All Manipur 10th and 11th Viva Voice Completed IRB Riflemen and Written Completed Jemadar Candidates 2019" took out the protest march towards Chief Minister bungalow but were stopped by a police team in front of Nupi Lan Complex at around 10.30 am.
A minor scuffle took place when the police tried to stop the protesting candidates but they were later pushed back till Keishampat Keisham Leikai community hall.
Speaking to the media persons following the incident, secretary of the JAC, Chingkheihanba stated that it has been three years since the recruitment process of 10th and 11th IRB was started by the Government but it has failed to declare the Viva Voce result for Riflemen and the written test result for Jemadars.
Despite appeals, no positive steps have been taken up till today to complete the recruitment process and to announce the results and such an apathetic attitude of the Government has ruined the hopes of the aspirants, he said.
He continued that they went to Chief Minister Bungalow to submit a memorandum to the CM as the next Assembly election is approaching and all the Government recruitment process will be stopped once election code of conduct is announced.
He also appealed to the State Government to announce the results and complete the recruitment process before the election code of conduct considering the hardships the candidates have been enduring. Later, a few representative of the JAC were allowed to submit the memorandum urging the State Government to expedite the recruitment process.