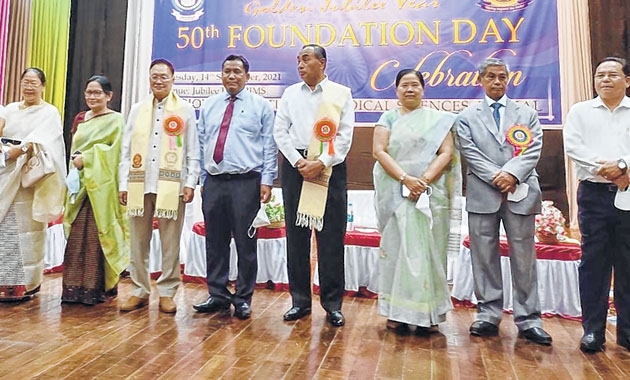 By Our Staff Reporter
IMPHAL, Sep 14 : The golden jubilee celebration of Regional Institute of Medical Sciences (RIMS), Lamphel, the only Central medical institute in the State, was held today at its Jubilee Hall.
RIMS Director, Professor A Santa; Medical Superintendent, H Priyoshakhi; DEAN,  Professor AK Brogen; retired faculties-Dr TY Babu and Dr L Joychand graced the function as chief guest, president and guests of honour respectively at the celebratory function.
Speaking at the function, Professor Santa said that RIMS has completed 50 years with many achievements.
He said that the journey of the medical institute began on September 14, 1972 with the objective of imparting, promoting and disseminating knowledge and education to undergraduate and postgraduate students in all the specialties of medical science, including super-specialist, advanced learning and doctoral courses.
“To create, provide, run and manage facilities and set up well equipped hospitals for comprehensive health care of excellence which include diagnosis, treatment, cure, prevention and rehabilitation were also the objectives of the institute,” he added.
The Director maintained that the medical institution aims at positioning itself among the country’s foremost medical institutes by embracing modern professional practices and focusing on core strengths besides creating endless opportunities for students, teachers and researchers.
Claiming that the year 2020-21 was a significant year filled with developments and milestones for RIMS, Santa went on to convey that the medical institution has so far produced a cumulative total of 3560 doctors while there are currently 547 undergraduate students at RIMS.
He also informed that a total of 1968 specialist doctors have also been produced from the said institution besides having 402 postgraduate students currently.
RIMS has also recently introduced Bachelor Degree Courses in BASLP, MLT, MRIT, he said.
The Director continued that several facilities have been successfully expanded and many modern equipment including High-end Ultrasonography machines, High-end Endoscopy System with endosonography, oxygen generators, ICU beds, Central  RT PCR and Extraction Set and TrueNat have been procured.
He added that a new Tesla MRI machine was also installed during the pandemic and Liquid Oxygen Plant with a 10 KL capacity, two PSA Oxygen Plants of 1000 LPM capacity provided under PM Care Fund have been installed in the hospital.
Saying that RIMS was ranked 38th in National Institutional Ranking Framework (NIRF) of the Ministry of Human Resource Development in the year 2020 and awarded the “Certificate of Appreciation” in the month of January this year by the State Government for exemplary performance under AB-PMJAY, Santa expressed wish to scale higher targets in the healthcare sector and make medical care more accessible and affordable to the people.
Apart from releasing a souvenir and annual report of the institute, distribution of awards to the meritorious students of the institution and honouring faculties and staff marked the function.