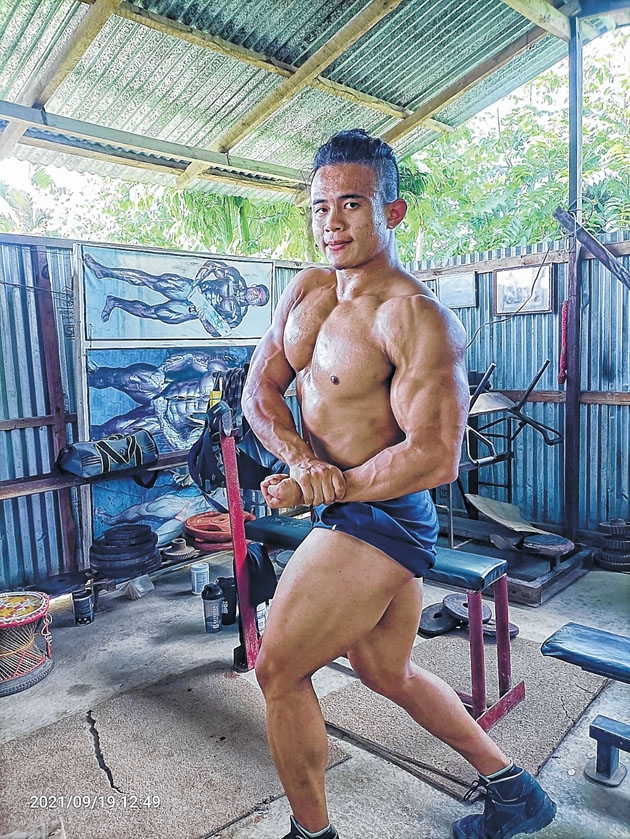 By Our Staff Reporter
IMPHAL, Sep 26 : Bodybuilder Joydev Thongam has expressed regret that he has not received any kind of assistance from the Government's side for participation at the National or International body building competitions till date.
The bodybuilder from Khurai Kongpal Thongam Leikai, who is among four athletes from Manipur to be representing India at the Mr World 2021, also expressed desire to receive slightest encouragement from the Government.
The 12th World Body Building & Physique Sports Championship 2021 (Mr World 2021) will be held from October 1 to 7 in Tashkent, Uzbekistan and Joydev, born to late Thongam Dhananjoy Singh and Laishangbam Jamini Devi will be competing in the 75 kg junior bodybuilding event.
He was selected by the All Manipur Body Builders Association (AMBBA) for the Indian trial conducted on August 29 at Chandigarh under the aegis of Indian Body Building Federation.
He will be leaving the State for the worlds on September 29 and will be heading to Uzbekistan from Delhi on September 30, he said while speaking to this reporter.
Joydev confided that he joined the gym while he was reading in Class VIII and started taking part in body building competitions after completing Class XII.
He trains at Super Gym at Khurai being opened by one Thounaojam Muhindro under the guidance of Jr Mr India 2014 title holder Sougrakpam Bungcha, he said.
Notably, the 19 year old, had managed runner up spot at the Senior Mr Chandigarh 2020 and had tried his luck at Jr Mr India 2020 as well after finishing second in an Imphal East bodybuilding competition.
On being asked why he took up bodybuilding, the budding star said he took up the discipline primarily to support his family and to alleviate the social stigma the family had to face after he lost his father when he was just 3 years old.
Joydev who expressed strong determination to carry both bodybuilding and education career forward, maintained that he faced financial restraints many a time as body building involves huge expenditure.
Since bodybuilding is a mind game, a slight stress can affect muscle quality and thus one needs to give full attention to it to be at the top, he said while adding that preparation is underway in full swing for the forthcoming world event.
Since the event will be featuring the best athletes from across the world, he has been depending on an extra diet and undertaking extra training, he said.
Even as a prior deposit of Rs 1.5 lakh for participation is yet to be made, he is making an all out preparation leaving the worries of the financial shortfall to the fate, he said while drawing the attention of the State Government to at least provide some assistance and encourage the state bodybuilders as done to athletes of other sports disciplines.