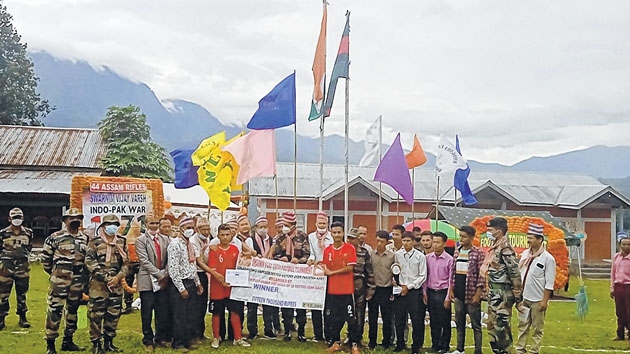 IMPHAL, Sep 6
As a part of Swarnim Vijay Varsh various commemorative events are being conducted pan-India wherein war “Veterans and Veer Naris” are felicitated and events like band displays, sports competitions, seminars, exhibitions, equipment displays, film festivals, conclave and adventure activities are conducted.
“Swarnim Vijay Varsh : Football Tournament” is one among many such events being organised by 44 Assam Rifles under the aegis of 22 Sect AR/IGAR(East). The tournament was organised in collaboration with AGMSU, Irang Part II unit, at Panikheti village, KPI district from September 1 and a total of 14 teams competed in it, said PRO of PIB (DW) in a statement.
The unit facilitated in preparing the playground & provisioned sports equipment required for the conduct of the tournament, it said.
The final match was played today in the presence of a huge local crowd. The winners were handed over the trophy and a cash prize of Rs 15,000 whereas runners up were awarded a cash prize of Rs 10,000. The Golden boot and golden ball players received Rs 2,500 each.
The unit had also organised a six-day mega wellness camp in collaboration with PHC, T Waichong at the sports competition venue itself. A total of 250 patients were examined and distributed free medicines at the spot.
The medical camp brought the medical practitioners at the doorstep of the needy, it said.
The closing ceremony saw a spectacular display of cultural programs depicting the rich and vivid culture of India. The mesmerizing military band martial tunes filled the air with Nationalist feelings, it said.
The Commandant, 44 Assam Rifles along with Kharga Tamang, Member Manipur State Minorities Commission declared the tournament closed.
Tri colour balloons and pigeons were released on this occasion. All Covid protocols and CAB were strictly followed during the conduct of the tournament, the statement added.