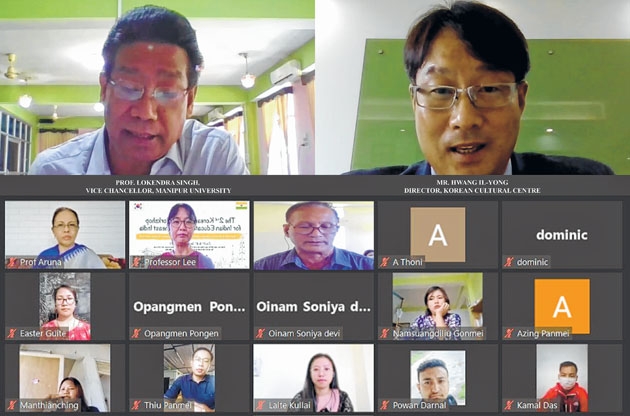 IMPHAL, Sep 7
The 2nd 'Korean Studies Workshop for Indian Educators' was held virtually on September 3rd and 4th at Manipur University.
The workshop was organised to help principals, administrators and teachers of Indian secondary schools to understand not only Korean language and culture, but also Korean history, politics, economy, etc. said a statement issued by Korean Language, Department of Foreign Language, Manipur University.
70 participants, 2 from each school from 5 North Eastern States were selected.
The event began with a welcoming speech and introduction about the workshop by Professor Hyun-Kyung Lee of Manipur University.
Professor N Lokendra Singh, the Vice Chancellor of Manipur University, gave a congratulatory speech highlighting that Manipur University is the only university in North East India to provide Korean language courses.
He also thanked the Embassy of Korea in India and the Director of Korean Cultural Centre and the Director of Korea Foundation for their support in many ways for the development.
The director of the Korean Cultural Centre Mr Hwang Il-yong expressed his anticipation of expanding the Korean language education in middle and high schools in North East India. He gave his best wishes for the workshop and extended his full support.
The workshop was conducted in five sessions, with one keynote lecturer and four lecturers from each specialized field invited to each session including Professor Baek Woo-Yeol of the Department of Political Science and International Relations at Yonsei University. Yeonsoo Kang, Secretary for Public Diplomacy, Korean Embassy, India; Professor Do Young Kim of Jamia Millia Islamia University and Professor Sandeep Mishra of the Department of International Relations at Nehru University.
The feedback from the participants said that they have learned a lot about Korea through lectures in various fields and saw the future prospects of Korean language education apart from just K-drama or K-pop.
The workshop started in 2019 with the first edition held in the same year, however the workshop was not held in 2020 due to the COVID-19 pandemic.