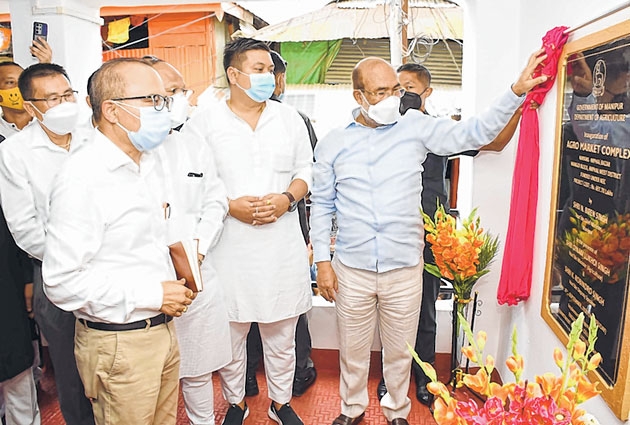 IMPHAL, Sep 8 (DIPR)
Chief Minister N Biren today inaugurated an Agro Market Complex constructed at an estimated cost of around Rs 6.97 crore under NEC funding at Mayang Imphal Keithel.
Education Minister S Rajen, Agriculture Minister O Lukhoi, CAF&PD Minister Th Satyabrata, Manipur Legislative Assembly De-puty Speaker K Robindro, MANIDCO Chairman Dr Radheshyam Yumnam, Manipur Building and Other Construction Workers’ Welfare Board Chairman H Dingo, Manipur State Haj Committee Chairperson Moulana Abdus Salam and Commissioner (Agriculture) M Joy also attended the inaugural function as dignitaries.
Speaking at the inauguration function cum Azadi Ka Amrit Mahotsav celebration held at N Tomchou Higher Secondary School Ground, N Biren Singh observed that leaders have great responsibilities to bring a Nation to the path of prosperity and progress. As such, leaders should avoid fabrication and never speak lies to the people, he observed while urging the people to elect those candidates who aspire to serve them with sincerity.
Stating that the present State Government has been working hard to address people’s woes, he said that many noble schemes had been introduced in this regard.
The Chief Minister said that CMHT health cards had been issued to around 4.5 lakh households besides providing benefits to many differently-abled persons under CMST.
The Centre had approved Rs 3050 crore for the State to implement "Jal Jeevan Mission - Har Ghar Jal" to provide tap water to all the households by 2024, he said. Under this scheme, the Chief Minister informed, a water supply scheme worth Rs 12.5 crore would be taken up in Mayang Imphal AC soon. Around 50 per cent of the total households of Manipur are getting tap water now, he said.
Stating that the State Government has been working hard day and night to tackle COVID-19 pandemic, N Biren Singh said that almost all the districts now have oxygen plants. Vaccination has been intensified and around 60 percent of the people whose age is 18 years and above have received their first dose so far, he added. As saving lives is more important, schools and colleges are not yet opened, the Chief Minister said.
Agriculture Minister O Lukhoi said that the newly inaugurated market complex would be one of the best markets in the entire State. He also urged the people to look after it as their own property.
Earlier, the Chief Minister inspected the site for the construction of Imphal West District Hospital at Mayang Imphal Konchak.