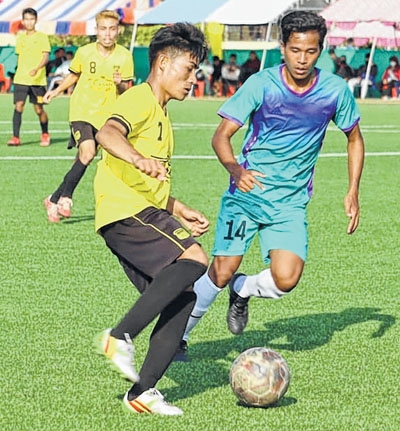 By Our Staff Reporter
IMPHAL, Jan 10 : Classic FA and SFC post contrasting wins to advance to the last 16 stage of the 12th Shaheed Manoranjan Singh Memorial CRPF Football Tournament being organised by the 143 Bn CRPF under the supervision of IGP, Manipur and Nagaland Sector CRPF at SAI ground, Takyel.
In the first match of the day, SFC produced a stellar performance to brush aside AIM, Khabam by 7-2 goals as Th Chinglemba and P James scored two goals each.
SFC dominated the game right from the word go and headed into the break with a comfortable 4-1 with Santosh opening the floodgate as early as 6th minute before Th Chinglemba doubled the advantage in the 6th minute. Ch Akash scored the first half goal for AIM in the 27th minute to make it 1-2 but Chinglemba completed his double in the 41st minute before Simson Th struck a goal during the added time of the first half (45+4').
AIM's E Joykishan added the other goal in the 48th minute before SFC resumed their onslaught and pumped in three goals via Y Zidan (54') and P James (69', 74') to wrap up the game 7-2.
SFC will play ESU in the pre-quarter final match.
Classic FA, Chingmeirong in the meantime, earned a slender 1-0 win over KYVO, Kwasiphai courtesy Serto Wosneilin goal (45+2') to book their pre-quarter final ticket.
RAU, Lairikyengbam Leikai will play NISA, Thangmeiband in the next match tomorrow.