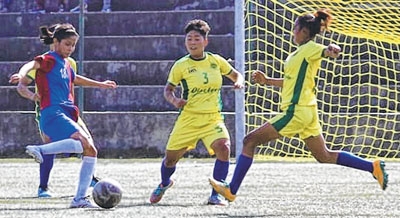 By Our Staff Reporter
IMPHAL, Jan 10 : YWC, KRYPHSA emerged victorious as MPSC and ICSA played out a goalless draw today in the 12th AMFA Senior Women's Football League (pre-qualifying round for Indian Women's League) at Artificial Football turf, Lamlong Thongkhong.
In the tourney's 7th match and today's first, Roja scored a treble (24', 30', 75') to help KRYPHSA edged past ESU 3-2. The goals for the Wangkhei team were on the other hand scored by E Panthoi Chanu (39') and I Prameshori (41').
Later in the second match of the day, MPSC and ICSA, Irengbam played out a goalless draw to share a point each.
Meanwhile, in the last match of the day, Hoineihat scored three goals to guide YWC to a comprehensive 7-1 win over WFA, Kakching.
W Diana Devi was first to open the scoring for YWC before L Ghanapriya of WFA conceded an own goal in the 24th minute to make it 2-0.
Hoineihat (36', 43', 73'), Thoibisana (47') and Nandeshori (66') took their turns to carry forward the scoring spree. The consolation goal for the Kakching team was scored by Kh Bhumika in the 70th minute.