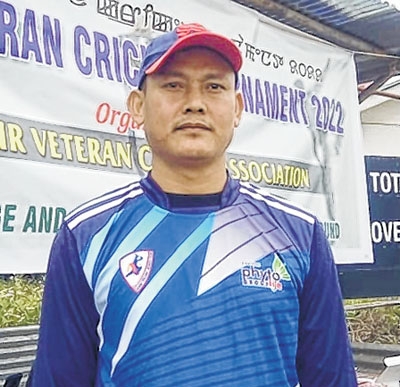 By Our Staff Reporter
IMPHAL, Jan 12 : LCCC, Lilong Chajing earned a comfortable 6-wicket win over YPHU, Lalambung Makhong in a Group A league match of the ongoing 9th T-20 Manipur Veteran Cricket Tournament 2022 today at Oriental College and Model Hr Secondary School ground.
LCCC won the toss and opted to field first.
YPHU, however failed to withstand concerted bowling efforts by LCCC bowlers and eventually bundled out for 100 runs with 3 balls of the innings left to be played.
Jillangamba of LCCC completed a hattrick in this innings which saw Dhaneshor topscoring for YPHU with 32 runs off 29 balls followed by Dularva (18) and Laingam (15).
LCCC's Krishnakumar and Rakesh also bowled well to pick two wickets each while Ashokumar, Akbar and Sanjit fetched a wicket apiece.
In reply, LCCC eased to 104 for 4 in 15.5 overs riding on significant knocks by Rakesh (28), Krishnakumar (21), Tarun (30) and Sanjit (13 not out) to hand YPHU second defeat in the tournament.
Sanjoy of YPHU managed two wickets for 25 runs in this innings and his compatriot Surjit claimed one for 22 runs.
Eventually, Jillangamba who set up a big collapse of YPHU with his hat trick was named man of the match.
CHAMP, Khagempalli will play YUCC, Kwakeithel Moirangpurel in a Group B league match tomorrow at the same venue.