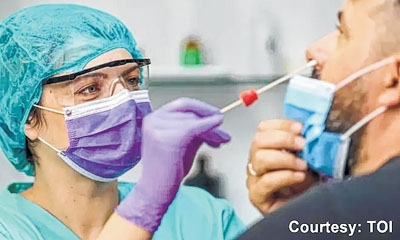 By Our Staff Reporter
IMPHAL, Jan 12 : Manipur continued to record new Covid cases in three figures for the second day on the trot, after the lull, with 206 new cases reported in the last 24 hours.
On January 11, the State had recorded 106 new cases, which was the highest spike on a single day after more than two months.
The 206 cases included 66 personnel from CAPF taking the number of active cases to 736.
Till date this is the highest number of positive cases detected from amongst CAPF personnel on a single day. Of the 66 CAPF personnel who tested positive, 49 are stationed at Chandel district.
Positive Cases
The 140 cases from general population were reported from Imphal East (22), Imphal West (72), Thoubal (4), Bishnupur (6), Kakching (3), Ukhrul (3), Senapati (2), Chandel (1) and Churachandpur (27).
With the addition of 206 new cases, the cumulative number of positive cases in the State has reached 1,26,550 (1,21,971 from the general population and 4579 CAPF personnel).
Covid Death
As no Covid related deaths were reported in the last 24 hours, the cumulative number of deaths continue to stay  at 2012.
Positivity Rate
As the 206 cases were found positive from 2396 samples that were tested at various testing centres in the State, the daily positivity has further been pushed to 8.6 percent against 5.1 percent yesterday.
Chandel district presents an interesting case in the last 24 hours, as only 1 civilian was detected positive while Central security personnel accounted for 49. The total 50 positive cases were detected out of 78 samples tested in the last 24 hours, taking the daily positivity rate (civilian plus security personnel)  to 64.5 percent. The daily positivity rate above the 5 percent mark recorded in the other districts are Imphal East (10.3 percent), Imphal West (8.7 percent), Churachandpur (8.3 percent), Bishnupur (6.9 percent) and Kakching (5.1 percent).
Recovery
As 9 persons were discharged today from home isolation (3), RIMS (1), JNIMS (4) and CCCs (1), the recovery rate has further slumped to 97.83 percent against 97.98 percent yesterday.
Vaccination
A total of 5970 doses of COVID-19 vaccines were administered on Jan 11. The cumulative number of vaccine doses that have been administered till yesterday now stands at 23,62,921 doses including 13,48,726 first dose and 10,12,582 second dose.
Till Jan 11, the State had administered 1613 precautionary doses.
With this the State has vaccinated 57.22 percent of its eligible population with the first dose of Covid vaccine and 43.25 percent with  the second dose.
Jiribam (59.27 percent), Imphal West (58.58 percent) and Kakching (57.58 percent) are the top three districts in vaccinating their eligible population with the second dose while Kangpokpi (13.31 percent second dose vaccination), Ukhrul (18.80 percent second dose vaccination) and Kamjong (22.83 percent second dose vaccination) are the worst performing districts.
The  Covid Control Room can be reached at 1800-3453-818.