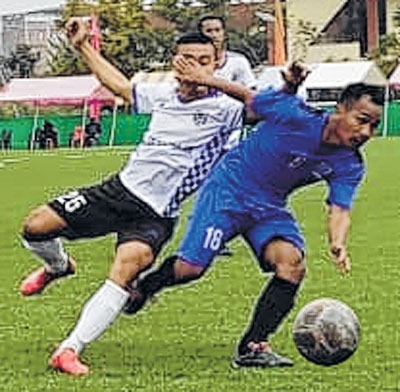 By Our Staff Reporter
IMPHAL, Jan 12 : WAFA, Wangoi outlasted MPSC 4-2 on penalties after 1-1 draw during regulation time and Sagolband United (SU) blanked KLASA FC, Keinou 4-0 to move into the last 16 stage of the ongoing 12th Shaheed Manoranjan Singh Memorial CRPF Football Tournament 2021-22.
In the fifth match of the tournament and today's first at SAI turf, WAFA and MPSC were neck and neck throughout the game sharing almost equal possession and scoring chances.
It was N Robert who gave WAFA the lead early in the 4th minute but Th Chingthangkhomba helped MPSC draw level in the 53rd minute with a fine effort.
The teams, however, remained unseparated till the final whistle despite frantic efforts from both the ends and eventually the match was decided via kicks from the penalty mark.
In the shoot-out, Md Esha, Kh Arvnada, K Rishikanta and L Ajit found the target from the spot to give WAFA a 5-3 edge as MPSC could convert two kicks via Kh Naoba and K Benjamin.
WAFA will now meet NACO, Nambul Mapal in the last 16 stage of the competition.
Later in the tourney's 6 match, Ch Anandkumar ran riot and scored twice in the second half to help Sagolband United (SU) romp 4-0 past KLASA FC.
SU had a slow start and were 1-0 ahead till the break with Paokhongam scoring the opener in the 29th minute and N Binan doubled the advantage and piled up misery on the Keinou team in the 59th minute.
Ch Anandkumar then further extended the lead to 3-0 in the 63rd minute as KLASA FC kept scrambling to find their composure and rose again in the 84th minute to complete the 4-0 rout and set up pre-quarter final clash with AFC, Thoubal.
State's I-League teams, NEROCA FC, Sangakpham and TRAU, Kwakeithel fight it for a pre-quarter final berth tomorrow from 11.30 pm at the same venue.