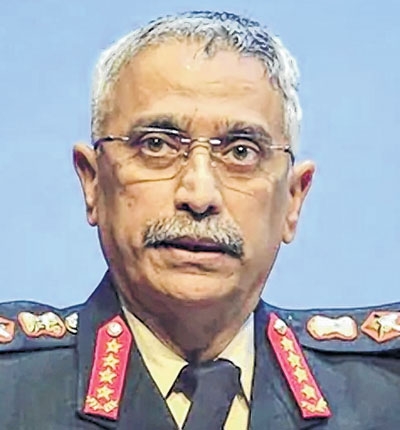 NEW DELHI, Jan 12
The Army is thoroughly investigating the “regrettable incident” in Nagaland’s Mon district on December 4, in which 14 were killed in a firing, and the inquiry report should be ready in a day or two, Army Chief General MM Naravane said on Wednesday.
Appropriate action will be taken and SOPs will be revised based on the report, he added.
Addressing the media virtually ahead of the Army Day on January 15, Naravane said a number of Army units involved in counter insurgency and counter terrorism duties have been disengaged—particularly from Manipur and Assam—and this testifies the improvement in the overall security situation in the North East.
They are now able to focus on their conventional role of war fighting, he said.
He said from wherever they have moved out, the Assam Rifles has taken over. “It is unfortunate that an ambush took place on the convoy of 46 Assam Rifles, but one incident is not indicative of deterioration of the overall situation in the North East,” he said.
He, however, said the Indo-Myanmar Border is an important facet of India’s security calculus and the Assam Rifles is giving due impetus to guarding the border. “We intend to progressively increase the number of AR Battalions deployed for border guarding in the times to come,” he said.
ON THE MON INCIDENT
Talking about the botched Army operation in Nagaland’s Mon district, the Army Chief said the Court of Inquiry ordered by the Eastern Command is in the final stages and the findings will be submitted in a day or two. He also said that the Army has been cooperating fully with the SIT investigating the incident.
He said both the CoI and SIT are taking statements of a wide cross-section of people involved for a greater understanding what had actually happened.
“Based on findings of the inquiry, appropriate action will be taken. The law of the land is paramount and we will uphold that,” he said.
“We remain committed to the security of our countrymen, even in the conduct of operations. We have SOPs that encapsulate our operational experience, which have stood the test of time,” he said.
“Appropriate action will be taken and corrective measures instituted to further refine our SOPs, based on the outcome of the investigation,” he added.
General Naravane said in February last year, India reached a renewed understanding with Pakistan and since then there has been a sharp decline in ceasefire violations at the Line of Control.
“Except two isolated incidents, there have been no ceasefire violations,” he said.
The Army chief said that while this has brought some normalcy on the western borders, Pakistan has continued the proxy war and terrorists continue to remain and train at the launch pads across the LOC.
“As many as 350-400 terrorists continue to be there at the launch pads across the borders as our combined intelligence inputs suggest. The threat from the western front can’t be ignored and we have to remain alert,” he said.
General Naravane said that the Army and the Ministry of Home Affairs are aware of the threats posed by drones in the western front in carrying in arms, ammunition and drugs and have taken a number of steps to counter the threat.
Talking about the demilitarisation of Siachen, the Army chief compared the world’s highest battlefield to the situation in eastern Ladakh, stating that the moving in of Army at Siachen took place because of Pakistan’s unilateral attempts to change status quo.
“We are not averse to the demilitarization of the Siachen glacier, but a pre-condition is acceptance of the Actual Ground Position Line (AGPL),” he said. News18