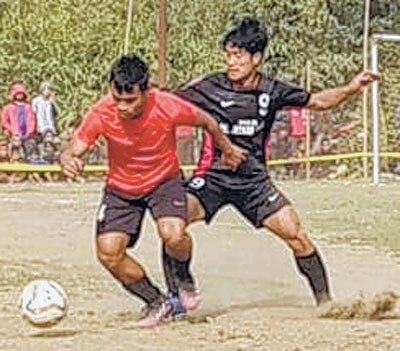 By Our Staff Reporter
IMPHAL, Jan 13: Football Lovers FC and MARUP FC have booked their semi-final berths at the ongoing 'Pradhan Trophy-2022' by beating their rivals at quarterfinal matches that were played today.
In the first quarterfinal match played between Football Lovers FC and NABA FC both the team had levelled their scores by the end of fulltime.
Football Lovers FC took the lead of the game early on with three early goals from Bikash, Rabichandra and Robin in the 5th, 7th and 10th minute of the game. NABA FC registered their first goal against Football Lovers FC with an own goal from Benson of the latter's team in the 47th minute.
Two quick goals from Bedysor of NABA FC, in the 51st and 60th minutes, levelled the score.
Both the sides were able to hold off each other till the end of fulltime resulting in a face-off in penalty shoot-out.
Bisor, Bikash and Nabir of Football Lovers FC were able to materialise their penalty while NABA FC was only able to convert 2 penalties, from Bedysor and Olen, resulting in a 6-5 defeat in the hand of Lovers FC.
In the second quarterfinal match played between Santhel FC and Marup FC, lone goal from Marup FC's Nanao on the 32nd minute provided Marup FC a berth in the semi-final.