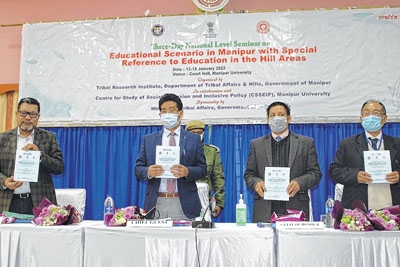 By Our Staff Reporter
IMPHAL, Jan 13: Manipur University Vice Chancellor Professor N Lokendra has urged to espouse the socio economic and political aspects while striving to improve the education system in the hill region of the State.
He made the above statement while speaking as the chief guest in the inaugural function of a three-day National level seminar on “Educational scenario in Manipur with special reference to education in the hill areas” which is being organized by Tribal Research Institute, Department of Tribal Affairs & Hills, GoM in collaboration with the Centre for Study of Social Exclusion and Inclusive Policy (CSSEIP), MU under the sponsorship of Ministry of Tribal Affairs, GoI.
Asserting that the education system in the hill districts during 1930s to early 1970s were fairly good with most of the primary and middle schools, particularly the missionary schools producing a good number of statesmen and bureaucrats in 1970s, the VC observed that the problems in the education of hill districts emerged in late 70s when its socio economic fabric were badly disturbed.
He added that a good number of young and promising children stop thinking in positive terms as an adverse impact of the disturbance in terms of the socio economic.
While comparing the situation of Nagaland and hill districts of Manipur, N Lokendra maintained that the earlier State adopted a community based education system and eventually bettered the education system.
Stressing on the importance of restructuring the syllabus of undergraduate course and post graduate course in line with NEP, 2020, he conveyed that the Deans of the different schools of study have been asked to discuss the problems that may face in restructuring the syllabus of the undergraduate programs that are being offered in the affiliated colleges of both the hills and valley of the State.
Saying that education is a very liberated and democratizing force, the Vice Chancellor expressed hope that the new education policy will bring some fundamental socio economic change in the State.
While delivering the presidential speech, CSSEIP, MU Director E Bijoykumar underscored the importance of inclusive development that seeks to ensure that every section of the society can avail all opportunities and benefits generated by economic development.
He said that any inter community or group based gap in access should be minimized and ultimately eradicated while claiming that the Governments at the Centre and State have been trying to redress the gap through several pro-active policies. He added that the inclusiveness in the education system of the State, vis-à-vis the education system in the hills has been a basic issue.
TA & Hills/TRI Director C Arthur Worchuiyo and Dean of School of Education Professor T Inaobi also attended the inaugural function as the guests of honor.