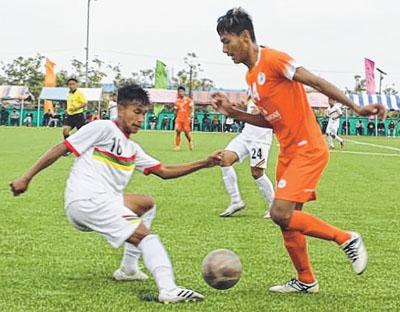 By Our Staff Reporter
IMPHAL, Jan 13: NEROCA FC have moved on to the pre-quarter final round after beating TRAU FC 6-4 at the 12th Shaheed Manoranjan Memorial Football  Tournament 2021-22 organised by IGP  M&N Sector CRPF today.
Kh LUCKY gave NEROCA FC 1-0 lead with a goal in the 33rd minute of the game. TRAU FC fought back to level the score but was denied every opportunity by NEROCA defence.
The much awaited equalizer from TRAU FC came in the 81st minute of the game from Th Naresh. Despite both the teams putting in their level best, the fulltime ended with a 1-1 draw.
Preparing for a penalty shootout, NEROCA FC fielded Thomas Sh, Kh Lucky, Jornathan, Ch Barian and Benjamin who netted all the penalties while 2 players of TRAU FC were denied goals by NEROCA FC's goalkeeper.
The match ended in a 6-4 win for NEROCA FC.
NEROCA FC's Kh Lucky and Manglenthang and TRAU FC's S Birjit were booked yellow cards in the match.