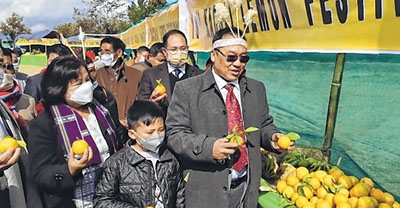 By Our Staff Reporter
IMPHAL, Jan 13 : The 18th State Level Kachai Lemon Festival began today under the theme "Organic Kachai Lemon for Safe Environment and Rural Transformation" at Kachai local ground in Ukhrul district.
The two day festival is being organised by Kachai Fruit Farming & Processing Co-Operative Society Ltd under the sponsorship of North Eastern Council (NEC), Government of India; EBADA; MIDH; MOMA; NABARD; MACS; ICAR; Department of Horticulture and Soil Conservation; Directorate of Trade, Commerce & Industries and Tourism Department.
Altogether 360 stalls are participating in the festival by producing a record 300 MT of lemons.
Speaking at the occasion, Project Director of MIDH & MOMA, K Debadutta Sharma said that the festival aims at boosting the plantation of the lemon variety which is unique, delicious and grown only in Kachai, Ukhrul.
Saying that MOMA found only about 32,000 kachai lemons being planted when it came to the area in 2016, K Debadutta maintained that the plantation  of this lemon variety has increased manifold since then as nearly two lakhs lemon plants are now grown in Kachai.
MOMA is ready to assist the growers of Kachai lemon whenever possible, he said.
Additional Chief Secretary of Horticulture and Soil Conservation P Vaiphei, who was the chief guest of the opening ceremony, stated that the State Government will do whatever is possible to market packaged products of Kachai lemon such as pickle and juice to  other States and beyond. Saying that Kachai lemon and other horticulture produces have the potential to improve the socio economic condition of Manipur, he urged all farmers to ensure better yield in the next season.
Project Director of EBADA and BRVDB Manipur N Loyalakpa also attended the programme.
Prizes for the best Kachai lemon were also given to at least three growers at the opening ceremony which was held with several cultural programmes.