Public safety at risk due to dilapidated Likhru bridge 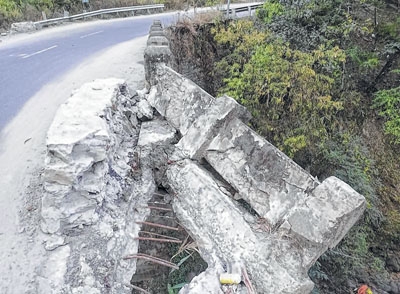 Our Correspondent
Senapati, Jan 13: The condition of Likhru bridge located between Chakumei and Makhan Tabio has been raising eyebrows from all corners.
Locals have repeatedly expressed their concern over the poor condition of the said bridge which has been left dilapidated and dangerous to travelers.
Due to tight curves on both sides of the bridge and smaller lane, accidents have been taking place frequently in the area. The bridge capability to hold the weight of heavy trucks carrying excess tons is questionable.
Over the years, people of the area have been urging the concerned authority to construct a bigger bridge at a suitable location to avoid more accidents and traffic inconveniences.
According to locals, the stretch between Tendongyang and Sapermaina Bazaar is in a deplorable state. Apart from huge potholes and craters, the recent repair work carried out by the concerned department has left many confused.
The difficulties faced by the people due to the worsening condition of the roads is a matter of serious concern and needs immediate attention.
It may be mentioned that, a major black topping work & construction of retaining walls from Mao gate to Koubru Leikha was reportedly carried out recently by the company BIPL.