Will save Manipur from corrupt politicians: Wilubou Newmai 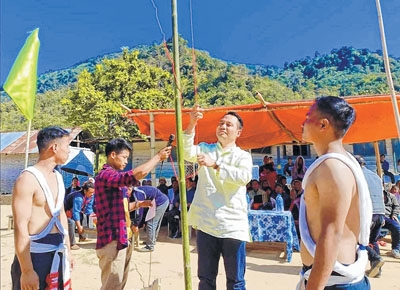 TAMENGLONG, Jan 13
Wilubou Newmai, spokesperson of Bharatiya Janata Party on Thursday interacted with the villagers of Tamei and Tousem blocks under 52-Tamei Assembly Constituency.
Speaking on the occasion, Wilubou Newmai expressed his appreciation to the people for the warm welcome and their unconditional support to the party.
He also urged the people to support the BJP to bring fast paced development in Tamei AC.
"I will save Manipur from Congress, save Manipur from corrupt leaders", said Wilubou Newmai while adding that no leaders/MLAs of the past have done anything for the people.
Highlighting the hardships faced by the people of Tamei AC, he mentioned that during his visit, the people have expressed their anguish over corrupt leadership and lack of development in the Constituency.
He continued that after decades of living in poverty and suffering, the people want a fresh face who can transform the entire Constituency.
"I cannot allow Tamei AC to be ruined by corrupt leaders. I will accomplish what local MLAs for decades have not been able to do. The future of India rests on the progress of its most backward areas. I want to be helpful to my country. It's a mission I have.", he asserted.
As part of his visit, Wilubou Newmai also pasted BJP stickers and handed over the 5 years' report card of the State Government under "My Family-BJP Family" campaign to the people.