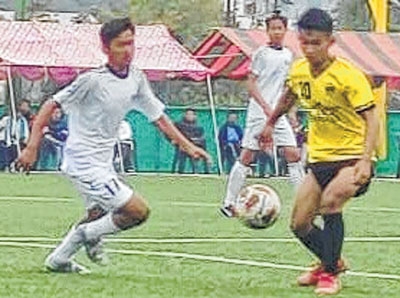 By Our Staff Reporter
IMPHAL, Jan 14 : Classic FA, Chingmeirong beat SAI 1-0 to book a place in the 12th Shaheed Manoranjan Memo-rial CRPF Football Tournament 2021-22 quarter final today at SAI ground, Takyel.
SAI and Classic FA got off to a cautious start and were off target till the break despite frenetic efforts. CFA however entered the field with more intent in the second half and took a while before Tongminsei K opened the scoring in the 68th minute and Gogocha Ch solidified their lead in the 83rd minute.
With little time left to play, SAI put in all effort to cut the gap down but ended up biting the dust as CFA defence stonewalled all their incisive runs to go home 2-0.
The day also saw KSC beat MUVANLAI on penalties in an all Kangpokpi clash and set up a pre-quarter final date with SSU, Singjamei who got a first round bye.
Winners' Cup champions, KSC found the breakthrough via Seineo Kuki in the 14th and enjoyed a 1-0 first half lead although MUVANLAI toiled hard to pull level.
MUVANLAI's consistent effort however paid dividends after the restart as KSC's Thangkhalen fumbled to score into his own net in the 54th minute to make it 1-1.
The scoreline, however, remained locked till the end of the regulation time even as both teams yearned for the winner with a series of attempts. Eventually the winners were decided via kicks from the penalty mark wherein Lankholen, Robinson, Neminlal and Sehgouhao scored to give KSC a 5-4 edge as only Seiminthang and Lungminthang were able to slot home from the spot for MUVANLAI.
January 15 matches
ESU vs SFC from 10 am
UKB vs 11 Star SU from 1 pm