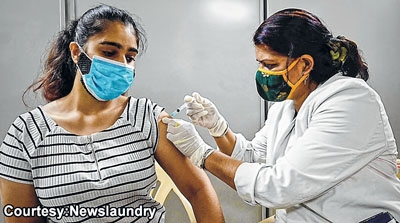 By Our Staff Reporter
IMPHAL, Jan 16 : The upward trend of new cases continues with 279 more testing positive for the coronavirus during the last 24 hours, with Central security personnel accounting for 77 cases. The hill districts, except for Chandel continue to occupy the bottom of the vaccination  table.
Cases amongst the Central security forces have seen a steep climb in the last few days, with 15 personnel reporting positive on January 10, 17 on January 11, 66 on January 12. The figure of 77  new cases is the highest reported from amongst the Central security personnel so far this year.
The daily positivity rate was a high 14.4 percent as the 279 new cases were reported from 1938 samples tested in the last 24 hours.
This is also the highest daily positivity rate recorded so far this year.
Along with the high daily positivity rate, the State also recorded one more death to take the total number of deceased persons due to the virus to 2015.
The deceased person hailed from Imphal East and while he/she had received the second dose of the vaccine, he/she had co-morbidities.
In a statement, the COVID-19 Common Control Room said that the 202 new cases from amongst the civilians were from people  of Imphal East (53), Imphal West (98), Thoubal (7), Bishnupur (2), Kakching (6), Kangpokpi (6), Ta-menglong (1), Churachand- pur (19), Tengnoupal (2), Senapati (4) and Ukhrul (4).
On the table of the daily positivity rate, Ukhrul district topped the list with 25.5 percent as 39 of the 153 samples tested returned positive results (Central security personnel included). Kakching is next on the table with 23.9 percent followed closely by Chandel with 23.7 percent. Churachandpur is also high up on the table with 20.9 percent while Kangpokpi recorded 16.2 percent. Imphal East had (18.7 percent) and Imphal West  (15.6 percent).
Other districts which returned above 5 percent daily positivity rate are Tengnoupal (10 percent) and Thoubal (5.1 percent).
The total number of positive cases now stands at 1,27,258 including 4718 Central security personnel.
In the last 24 hours, 59 persons were discharged from home isolation (32), JNIMS (3) and CCCs (24).
The recovery rate is now 97.41 percent.
On the other hand, the number of active cases has grown to 1282 including 262 Central security personnel.
The total number of Covid vaccines administered on January 15 is 4507 taking the cumulative number of vaccines administered to 23,86,700 inclusive of 10,19,282 second dose and 5962 precautionary dose.
Kangpokpi continues to be at the bottom of the vaccination table with only 13.44 percent of the eligible population having received the second dose. At Ukhrul only 19.02 percent of the eligible population have received the second dose while at Kamjong it is 23.07 percent.
Noney (29.31 percent), Pherzawl (32.07 percent), Tengnoupal (32.58 percent),  Tamenglong (29.95 percent), Senapati (24.85 percent) make up the lower end of the vaccination table.
On January 15, a total of 150 D Type Oxygen cylinders and 51 B Type Oxygen cylinders were made available to different health centres across the State.
The bed vacancy as given by the COVID-19 Common Control Room at JNIMS is 123 out of the total 190 beds and at RIMS the figure is 37 out of the total 47 beds for Covid patients.