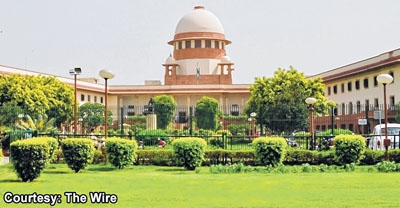 New Delhi, Jan 18
The Supreme Court on Tuesday agreed to examine a seeking direction to the Election Commission to de-register a political party, which fails to comply with the Court's direction to disclose criminal antecedents of candidates fielded in polls.
Advocate Ashwini Upadhyay requested a bench headed by Chief Justice NV Ramana and comprising Justices AS Bopanna and Hima Kohli to list the petition urgently, against the backdrop of the ongoing election process. He contended that nomination for the first phase of the Uttar Pradesh Assembly election has started and the political parties and candidates are brazenly violating the top Court judgments.
After briefly hearing Upadhyay, the bench said: "We will consider it... will give a date".
The plea claimed that the cause of action for filing the plea arose after the Samajwadi Party fielded alleged gangster Nahid Hasan from Kairana but neither published his criminal records in electronic, print and social media nor the reason of his selection within 48 hours. On February 13, last year, Shamli police imposed the Gangster Act on Nahid Hasan, who is a two-time MLA from Kairana. "He (Hasan) has multiple criminal cases and is the 'mastermind' behind the Hindu exodus from Kairana. There are many criminal cases including fraud and extortion and he was declared a fugitive by Special MLA-MP Court," the plea said.
The plea argued that consequences of permitting criminals to contest, and become legislators are extremely serious for democracy and secularism.
The plea sought a direction to the Election Commission to take steps to ensure that every political party publishes the details regarding criminal cases of each candidate along with reason for such selection on the homepage of its official website in bold letters within 48 hours in spirit of top Court orders passed on September 25, 2018, and February 2, 2020.  IANS