A tribute to Athokpam Indrakumar Singh 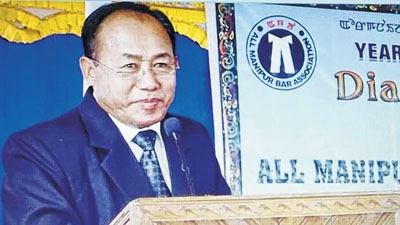 Salam Rupachandra Singh
A time there was to get trained oneself in martial art for self defence as well as to maintain good health three/four decades ago. This was due to prevalence of goondaism culture vis a vis opening of Taekwondo training classes by Trainers like Athokpam Indrakumar Singh and some others in the State.
The Bruce Lee films or other martial art films were one time very much popular in the region amidst the abuse of drugs and use of narcotic substances at its peak among the youth in the region due to its border with Myanmar. Through it, the popular No.4/ heroin has been brought into the State easily.
Many youth opted for different martial art streams those days, however, its momentum, it seems, has been reduced to some extent these days. One of the reasons for it may be due to non inclusion of this form of martial art in the Olympics Games. These days even in Manipur which is termed as the powerhouse of sports, its youth and people look forward for the sports disciplines  which have a place in the Olympic games hoping for participation and winning medals at this popular event of games and sports.
Everyone accepts that winning more and more medals in Olympic games is the topmost dream and expectation of this country.
Not only the boys but girls  also have joined to get trained themselves in martial art for self-defence, self-confidence and winning medals in tournaments and championships.  Eve teasing is there everywhere in India but the advent of training Martial Arthas reduced eve teasing.
There is no harm in getting oneself trained in such skills and as such regular martial arts courses are still continuing in many parts of the State as well as in the country.
Athokpam Indrakumar Singh was born on 10th March 1953 at Thangmeiband Hijam Leikai as the first son of late Athokpam Ramdas Singh and Late Athokpam (O) Tampaklei  Devi. He had one brother and three sisters. He is married to Elvera Lydia and she is now a retired Lecturer. They gave birth to two daughters and one son who are working in Film and Advertising, Delhi, Accenture, Bangalore and Financial Institution, Manipur. He had four grandchildren in his life time. After completion of schooling, he did his BA from DM College of Arts in the year 1976. Thereafter, he did his LLB from Lucknow University in the year 1980, he also did Diploma in Public Administration. Besides educational and professional qualification, he achieved Black Belt 2nd Dan in Taekwondo which is a Korean form of martial art. He achieved laurels in this martial art and won two National gold medals in the year 1977 & 1978 in the light weight category.
He was an international Taekwondo player participating in the 6th World Taekwondo Championship held at Copenhagen, Denmark, Europe in the year 1986. Coming to his profession of practicing law, he acted as legal Advisor of many organizations and institutions. He was legal advisor of Indian Trade Union Congress from 1987 to 1990, All Manipur Football Association from 1990 to 1993 and was standing counsel for Punjab & Sind Bank from 1994 to 2002. He was the founder president and was in the post of president of All Manipur Taekwondo Association from 1980 to 1989.
Further, he was elected as the president of All Manipur Bar Association for two terms, i.e, 2007-2009 & 2011-2013. He acted as legal Advisor of Archdiocese since 1991 and Administrator of St George High School wef 1991 till his death. He expired on 7th day of January, 2022 at RIMS out of a post cardiac surgery. He had been also infected with Covid-19 recently as told by his friend and having Covid-19 post reaction.
He was a fine gentleman and a good citizen of the country. During his tenure as president of AMBA, he acted very sincerely and honestly for the upliftment of the lawyers community.  He had certain unwanted and unwarranted systems changed and streamlined while serving as the president of the All Manipur Bar Association. Many youth had been trained the Korean Martial Art by him and as such he was known and fondly addressed as Oja India in this field.
He was a fearless person and very firm in his words and acts. He wanted every man to be a good man and do something good for the society. His contributions to the society more particularly to the institutions and organizations wherein he worked are remarkable and commendable.
Though his untimely and unexpected death has left everyone disconsolate, it is under God’s will and plan. Recently in a marriage ceremony, he was a part of it as an invitee, for whom, I and one of his contemporary friends reserved a seat in the ceremony as the place was not so much spacious. He  didn’toccupy the seat despite our phone calls.  May Oja’s soul rest in peace and others like him  may follow his unfulfilled dreams and footsteps to work for the people and society by becoming good citizens  of the  country.