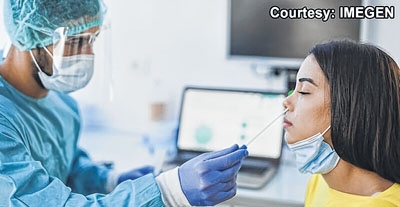 New Delhi, Jan 19
The third wave of the COVID-19 pandemic in India may peak on January 23 with daily cases likely to remain below the 4 lakh mark, according to a scientist at the Indian Institute of Technology-Kanpur.
Delhi, Mumbai and Kolkata have already reached their peak in case numbers in the past seven days, said Manindra Agrawal, a Professor at IIT Kanpur and one of the researchers associated with the Sutra Covid model.
The Sutra model has been used to track and predict Covid case numbers in the country since the beginning of the pandemic.
According to Agrawal, COVID-19 cases will peak in Maharashtra, Karnataka, UP, Gujarat, and Haryana this week, while States like Andhra Pradesh, Assam, and Tamil Nadu may peak next week.
The daily peak cases are projected to peak on January 23 in India and stay below the four lakh mark. Metro cities Delhi, Mumbai, and Kolkata have already peaked, Agrawal told PTI.
Trajectory with data up to 11th indicates the peak on 23rd Jan with nearly 7.2 lakh cases per day. The actual trajectory is already deviating significantly, and the actual peak is unlikely to cross 4 lakh cases/day, Agrawal tweeted on Tuesday.
Agrawal had earlier predicted that the COVID-19 third wave will peak by January end.
“Across the country, the trajectories are changing significantly. I speculated earlier that it is due to ICMR guidelines for a changed testing strategy. However, at many places, these guidelines are not yet implemented and still, the trajectory has changed!” he said.
According to a new Government advisory, individuals undertaking inter-State domestic travel and contacts of confirmed Covid cases do not need to get tested unless identified as high risk based on age or comorbidities,
In his view, there are two plausible reasons for the change in the Omicron-led case trajectory in India.
There are two groups in the population, one with less immunity against Omicron and the other with more. The mutant first spread in the first group causing a sharp rise. Now the first group is exhausted and so the spread is slower, he explained.
Agrawal noted that there was a lot of concern when the Omicron variant started spreading in November last year.
However, he said, in the last week or so, people almost everywhere have concluded that the variant causes only mild infection and have decided to handle it with standard remedies instead of getting tested.
Previously, a study conducted by a different research team at the institute showed that the third wave of the pandemic in India might peak by February 3.
That study, posted on the preprint repository MedRxiv on December 23, studied the trend of the Omicron-led surge in COVID-19 cases in other countries and predicted that India too will witness a similar trajectory.
India on Wednesday reported a single-day rise of 2,82,970 new COVID-19 infections and 441 fatalities, pushing the country’s tally of cases to 3,79,01,241, and death toll to 4,87,202, according to official figures. PTI