On the demand to repeal AFSPA Will be 'most happy' if Army is relieved : COAS 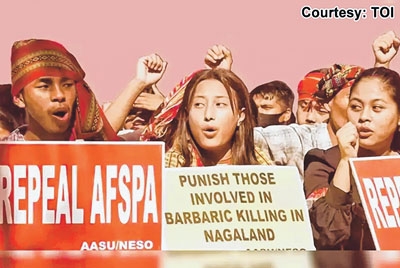 New Delhi, Jan 20
Army Chief General MM Naravane, on Wednesday, said that the argument on repealing the Armed Forces Special Powers Act (AFSPA) needs a different approach, wherein the Disturbed Areas status of States needs to change.
Taking the example of Tripura, where the Act was repealed, Naravane said that repealing AFSPA from Nagaland is a decision of the State Government and Centre but added that the Army will be 'most happy' if the Army is relieved from its policing duties in disturbed areas so that it can focus on its primary role of fighting a conventional war.
"We (Army) are only the instruments in implementing AFSPA. I will be most happy if a call (to repeal AFSPA) is taken as the Army can focus on the conventional role of the Army," Naravane said in an exclusive interview to Times Now's Editor-in-Chief Rahul Shivshankar.
His comments may be viewed on the backdrop of calls to repeal the AFSPA after a botched-up Army operation resulted in the deaths of 13 civilians in the Tiru-Oting area in the Mon district of Nagaland on December 4. He also added that a thorough inquiry has been conducted by the Army's Eastern Command to ensure that justice is delivered to all the affected parties.
Naravane subtly acknowledged that China is a bigger threat to India than Pakistan and added that 'insecurity' could be one of the reasons behind China's expansionist maneuvers in Eastern Ladakh. He, however, stressed that dialogue could resolve the differences between the two countries. "Every time we talk to each other, we understand each other's positions and whatever differences are there, we're able to dwell on it and reach a point," he added.
Calling the ceasefire agreement between India and Pakistan an important step towards ensuring peace along the Line of Control (LoC), Naravane hoped that at some point, Pakistan will have to revise its strategy of fuelling non-State actors against India. "We as a country have always wanted good relations with our neighbours... At some point, Pakistan will have to revise its strategy (of a thousand cuts). Because you cannot keep doing the same if no results are achieved," he added. Courtesy Times Now