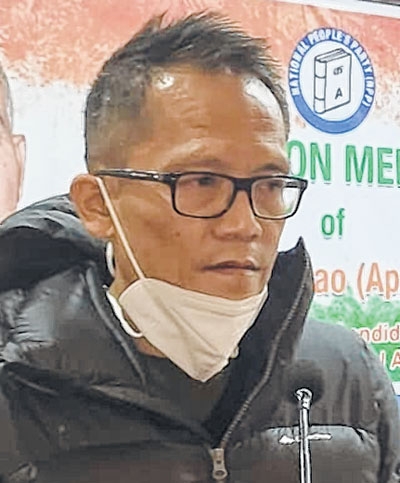 By Our Staff Reporter
IMPHAL, Jan 24 : National People's Party candidate for  Chandel Assembly Constituency Lunkhopao (Apao) Haokip started his campaign for the 12th State Assembly election amid strong opposition by a section of people, today.
Reportedly, Lunkhopao Haokip who joined NPP only yesterday is barred from entering Chandel by some elements and as such he launched  his election campaign at Imphal Hotel in the presence of Deputy Chief Minister Y Joykumar and some key Kuki leaders.
Letpao Haokip who joined BJP last month and opted to contest the ensuing election from Tengnoupal AC is his cousin.
At Hotel Imphal, Lunkhopao Haokip said that Chandel is becoming more like a confluence of crises due to the presence of some self proclaimed Nationalists.
Saying that some elements have been restricting him from contesting the 2022 election, the NPP candidate reasoned that he too has the very right to contest an election like all.
Alleging that this group of people frequently intimidates his workers too, Lunkhopao continued that such conduct disappoints him at times.
"I am ready to face any obstacles for the truth as a large number of people have supported me," he said and urged all village chiefs concerned to stand for the truth too.
" Let's open an account for NPP in Chandel AC for another term," he added.