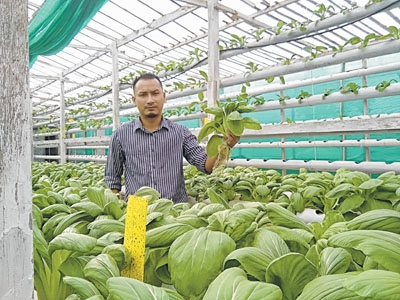 By Our Staff Reporter
IMPHAL, Jan 3 : Founder of Urban Farms Manipur (UFM) Yumnam Neeraj has stressed on the need to adopt advanced farming methods to ensure food sustainability and food security because of the increasing population and limited land resources available.
Yumnam Neeraj (31) is son of Yumnam Birchandra and Yumnam (o) Dhanamanjuri Devi of Kongpal Kshetri Leikai. He graduated from Doon College of Agriculture, Dehradun and completed MSc in Agronomy from Lovely Professional University, Jalandhar, Punjab where he worked as a teacher for some time.
Neeraj took Hydroponic as a dissertation topic while pursuing his Master's degree in 2014 and established UFM in 2019 at the rooftop of his house by planting over 1,500 plants to promote Hydroponic and later shifted to Yaralpat where he has been practicing the modern farming method.
Hydroponics is a type of horticulture and a subset of hydroculture which involves growing plants (usually crops) without soil, by using mineral nutrient solutions in an aqueous solvent.
Urban Farms Manipur mainly focuses on growing Leaf Cabbage (Kale), Celery, Bok Choy and Napa Cabbage and has a plan to cultivate King Chilly (U-Morok), Cherry Tomato too in future.
Through Hydroponic, one can grow plants/crops on any available space without the worry of pest infestation and achieve precision farming. This modern method of farming also leaves only a minimal amount of carbon footprint.
There are varied systems in Hydroponic and the one that Neeraj has adopted is Neutral Films Technique (NFT) where in a very shallow stream of water containing all the dissolved nutrients required for plant growth is re-circulated past the bare roots of plants in a watertight channel.
A high level of Dissolved Oxygen (DO) is recommended in this method.
Speaking to The Sangai Express, Neeraj stated that he came across this method of farming while watching Discovery channel when he was in his teenage years.
Though Hydroponic is not very new, this system of farming is not advancing fast due to certain technical issues, Neeraj said.
Saying that promoting Hydroponic is imperative to ensure food security as land and other resources for growing crops have been shrinking at an unprecedented rate, Neeraj said that Urban Farms Manipur too has been providing both online and offline classes on Hydroponic technology to promote the same.
"The faster farmers learn of this method, the better it would be to the society and ensure food security," he said and added that "UFM has so far trained over 50 students."
Maintaining that several youth are enthusiastic in learning new skills but  they mainly focus on earning quick money, Neeraj said that patience and dedication are keys to succeed in this method of farming as in other fields.
"Impatience is the root cause of failure in any field," he added.