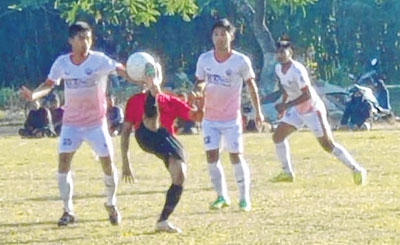 By Our Staff Reporter
IMPHAL, Jan 4:   Yairipok FC blanked KFC 4-0 as PSWAS thrashed MSH 5-1 in their penultimate Group (B) stage matches of the ongoing 3rd Division Football League organised by the District Football Association, Thoubal at Thoubal Kshetrileikai ground.
It was the fourth win for Yairipok FC in five matches and eventually they are atop Group B on 12 points.
Yairipok FC were in full command from the word go and were only 1-0 ahead till the break with Kishan goal in the 8th minute.
Deny then doubled the lead in the 37th minute as KFC, Kiyam Siphai failed to find their composure before Chaothoi and Sanathoi took their turns to score a goal apiece in the 45th and the 49th minute respectively and close out the game 4-0.
Meanwhile, PSWAS, Sangaiyumpham registered their third win in 5 matches thanks to braces by Kamal (12', 39') and Asif Khan (43', 46').
Abdulha scored a freak early goal in the first minute for MSH, Sapam but it turned out to be their last as PSWAS took full control of the game in the remainder of the game.
After settling the first half in a 1-1 draw, Kamal completed his double to overturn the lead in the 39th minute and Imran extended the lead to 3-1 with a goal in the 41st minute.
Asif then took honour to fire home twice, back to back in the 43rd and the 46th minute  and sealed the game 5-1.