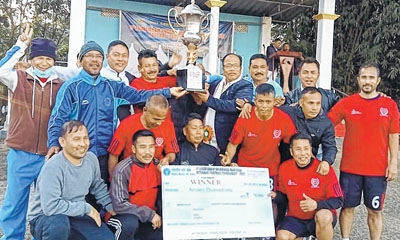 By Our Staff Reporter
IMPHAL, Jan 5 : Hosts UVSA-A came back twice to beat VSAI by 3-2 goals in the thrilling final of the 1st Lourembam Anganghal Memorial Veterans' Football Tournament-2021 staged today.
Both the teams started cautiously and were leveled at 1-1 till the break as S Santa found the breakthrough for VSAI in the 19th minute only to be equalized by UVSA-A via W Ajit  the very next minute.
Rumi then scored in the 39th minute to turn things around in UVSA-A's favour but VSAI clawed back into the game with Rajesh Meitei pulling level in the 42nd minute of the match.
With the competition wide open, VSAI and UVSA-A exchanged a series of runs in search of the difference maker  until Manaoba struck home the winner at the stroke of the hour mark and sealed the game 3-2 in UVSA-A's favour.