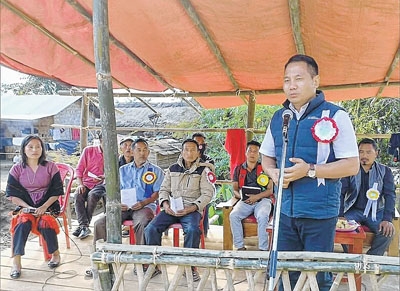 IMPHAL, Jan 5
BJP spokesperson, Wilubou Newmai has today attended a Sports Meet cum Ground Dedication" programme at Kawalong village in Tamei Sub division under Tamei Assembly Constituency today as the chief guest.
A press release issued by the BJP spokesperson said that importance of sporting facilities and infrastructures to groom and instill skills to youth of Tamei AC was highlighted at the occasion.
He also pledged that no stone will be left unturned in redressing genuine grievances of the people and reassured that the BJP government is committed towards development of far-flung areas of the country in terms of infrastructure development and ensuring basic facilities, the release said.
It also quoted Wilubou Newmai as saying, “I will keep the State of Manipur safe. I’m going to protect the indigenous people of Manipur. I will fight for better Manipur.”
Several issues and concerns raised by the people of the area including construction and improvement of roads, unemployment, better health, water, and education facilities etc were discussed, it said.
He had also exuded confidence and expressed willingness to sincerely serve the people of Tamei (ST) Assembly Constituency, it said.
Highlighting the immense progress made under the BJP regime, Wilubou also expressed his commitment and priority to work for the overall development of Manipur by empowering the youth and women at the grassroots through skill development and entrepreneurship, it said.
Wilubou also called upon the people of Tamei AC to support his endeavour in making Tamei a role-model constituency in Manipur where corruption is rooted out and all benefits of various development and welfare schemes reach the grassroots level, it said.
He also urged youth to actively participate and endorse clean politics for a better future, it said.
He also promised to take up necessary steps to improve healthcare and road infrastructures in far-flung villages so that the health and well being of the majority poor are no more neglected, it said.
During his visit, more than 1000 poor and needy families whose livelihoods were affected by the pandemic were also extended financial help, it said while adding that the people of the area have also expressed their appreciation for helping them during these trying times.