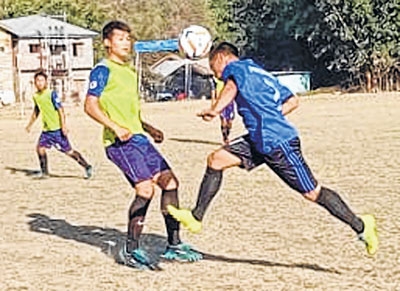 By Our Staff Reporter
IMPHAL, Jan 7 : Nungpan FC beat Chakpikarong FC 5-4 via penalties after 1-1 draw during normal time to make it to the last 16 stage of the 41st Chakpikarong Sub-Divisional Sporting Association (CDSA) Sports Meet football which kicked off today.
It was a keenly contested game with Chakpikarong FC and Nungpan FC looking for the
NL Kenedy scored in the 8th minute of the match to boost pre quarter final chances for the Chakpikarong FC but Motilar goal for Chakpikarong FC canceled the lead in the 48th minute.
With the two sides unable to break the deadlock till the final whistle, the game was decided via tie breaker wherein Nungpan FC managed five goals against their rivals who could score only four goals.