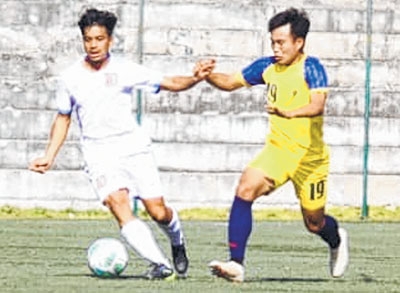 By Our Staff Reporter
IMPHAL, Jan 8 : Solomon scored twice to help KSC, Kangpokpi secure a 6-1 aggregate semi-final win over XI Star SU in the ongoing 25th Thangjam Birachandra-Maipakpi Memorial Winners' Cup for Men 2021-22.
Having won the home leg 2-1, confident KSC started slowly today at Artificial Turf but ran riot in the second half to torment home team, XI Star SU 4-0.
After a barren first half, Seiminhao ended the goal drought in the 58th minute before Robinson doubled the lead in the 63rd minute.
The scoring spree continued with Solomon scoring his opening goal in the 71st minute and completed his brace in the 83rd minute to make it 4-0. Stunned by the goals, XI Star SU struggled hard to come back but failed to even earn a face saving goal as KSC defence stood firm to deny any change in the scoreline.
Meanwhile in a semi-final first leg staged at the same venue, visitors PAMYAL rode on a treble by Rojen to carve out a 5-3 win over UBFC, Ukhrul.
Rojen scored the opener early in the 5th minute before extending the lead in the 27th minute.
As Thotngayung pulled back a goal for the home team in the 30th minute, PAMYAL headed into the break with a 2-1 lead.
The opening minutes of the second half saw the two sides exchanging a few runs until Rohen converted a fine chance in the 71st minute and completed his treble and made it 3-1. Undaunted by their rivals' lead, UBFC toiled hard to come back into the game and it was Khangahmn who reduced the deficit to only one goal by scoring the team's second in the 78th minute.
PAMYAL managed another goal via Rajkumar in the 82nd minute to regain two goal lead but UBFC fought back and made it 3-4 with Chrispin Kanson scoring in the 90th minute. PAMYAL, too, did not give up easily and went on to score another during the stoppage time through Suranjoy and eventually wrapped up the game 5-3.
PAMYAL will host UBFC, Ukhrul in the semi-final second leg on January 10.