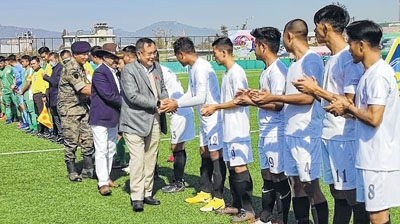 By Our Staff Reporter
IMPHAL, Jan 8 : The 12th edition of Shaheed Manoranjan Singh Memorial Football Tournament kicked off today at SAI Sports Complex, Imphal in the presence of Minister of State for External Affairs and Education, RK Ranjan Singh.
The tournament is an annual event organised by Manipur and Nagaland Sector CRPF since 2010 in memory of Shaheed Ng Manoranjan Singh, Assistant Commandant, a native of Yurembam Makha Leikai.
Manoranjan was the only son of late Ng Budhachandra and Ng Memcha who sacrificed his life while fighting naxalites in Chhattisgarh in 2009.
A press release issued by the Commandant of 143 Bn CRPF recalled that Manoranjan (during his posting in 201 CoBRA Bn) was deputed to launch an operation against Maoists in Singhanmadgu village, Dantewada district of Chhattisgarh on September 17, 2009.
During the operation, he raided  a weapon factory run by the Maoists and neutralized a Maoist camp. Huge cache of arms was recovered from the site. The troops dismantled the weapon factory and the training camp established along with the factory, it said.
While withdrawing, the Maoists who had been waiting for an ambush opened indiscriminate fire on the security forces and tried to encircle the troops and Commander Manoranjan divided his team into three and launched a counter attack and forced the Maoists to flee. But sadly, six CRPF personnel including Shaheed Ng Manoranjan Singh sacrificed their lives during the gunfight, it said.
Considering his unmatched bravery, undeterred determination, exceptional leadership and conspicuous gallant action, the officer was awarded the Police Medal for Gallantry (Posthumously), it said.
MS Shekhawat, IGP M&N Sector CRPF gave the welcome speech and gave an insight of the bravery of Shaheed Ng Manoranjan Singh, Assistant Commandant, it said.
The Minister of State for External Affairs and Education offered tribute to the Shaheed officer and presented a shawl to Ng Memcha, mother of Shaheed Manoranjan, it said.
The chief guest also praised the CRPF for organizing the tournament in the memory of the local martyr. He also urged the local youth to come forward and become responsible citizens.
The opening ceremony was attended by senior police officers, senior officers of CRPF; A Santa Singh Director (RIMS); Ng Bimola Devi, Chairperson of Takyel Zilla Parishad ; K Bimola Devi, Pradhan of Takyel Gram Panchayat and others.
Former Indian Football striker Lalkhohao (Kiran) Khongsai and L Chaoba Devi of KRYPHSA Football Club were also honoured during the opening ceremony, it said.
24 top teams of Manipur are participating in the tournament this year, making it one of the most sought after tournaments in the State, it said.
The opening match of the tournament was played between UKB, Churachandpur and YPHU, Lalambung Makhong, Imphal wherein the Churachandpur team beat YPHU 4-3 after a 1-1 draw during normal time.
It was a neck and neck competition from the word go as the winners will advance into the next stage. Paolenlal of UKB was first to break the deadlock in the 10th minute but Y Kamando pulled level in the 23rd minute.
Despite effort, the two sides entered into the break with the score levelled at 1-1 and sadly the two sides remained unseparated till the final whistle even as the two sides got plenty of chances in the second half.
Eventually, the winners were decided via tiebreaker wherein Lalminlun, Ngamminlal, Johnte and Lalboibi found the target for the Churachandpur team while only Y Kamando, P Renedy and Lunkhongam Haokip scored from the spot for the Lalambung team.
AIM, Khabam will play SFC, Imphal on January 10 in the second match from 10 am before KYVO, Bishnupur take on Classic FA from 1 pm.