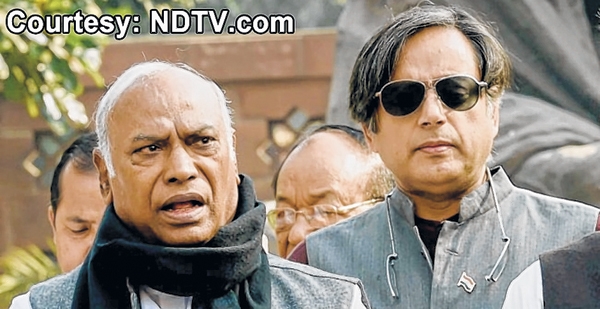 NEW DELHI, Oct 18
On Monday, more than 9,500 Congress delegates across the country voted to choose between Mallikarjun Kharge and Shashi Tharoor as their next party chief. For the first time in 24 years, no member of the Gandhi family is a candidate for the party’s top post. Madhusudan Mistry, who heads the party’s Central Election Authority, told reporters that 96% of the 9,915 Pradesh Congress Committee (PCC) delegates had voted.
While Mr Tharoor pitched himself as the “candidate for change”, Mr Kharge is being seen as the “establishment” candidate for his proximity to the Gandhi family. Several senior leaders, including Ashok Gehlot, P Chidambaram, Ambika Soni, and Mukul Wasnik, asserted that the Gandhi family would continue to play a key role. Before the start of polling, both Mr Kharge and Mr Tharoor tweeted that they had wished each other luck.
“I have been waiting for a long time for this day,” said outgoing president Ms Sonia Gandhi to reporters after voting at the All India Congress Committee (AICC) headquarters. Former Prime Minister Manmohan Singh, Mr Chidambaram, and party general secretary Priyanka Gandhi Vadra were among those who also voted at the polling booth at the AICC office. Former party chief Rahul Gandhi is among the 50 delegates who are part of the ongoing Bharat Jodo Yatra and voted at a specially made booth inside a container at Ballari in Karnataka.
In all, there were 36 polling centres across the country to conduct the sixth presidential election in the Congress’s nearly 137-year-old history. The voting started at 10 am and ended at 4 pm. The counting, as well as the declaration of results, will take place on October 19.
“The most satisfactory thing for us was that in all States where polling booths were set up, no adverse incident was reported. This is a big achievement ... polls were held in an open process in a peaceful manner,” Mr Mistry said, adding, “The Congress party has shown what internal democracy is and other parties that want to take a lesson from it can do so.” The Congress has not had a full-time president since Rahul Gandhi resigned from the post in 2019. Ms Gandhi had been appointed interim party chief till the elections.
Courtesy The Hindu