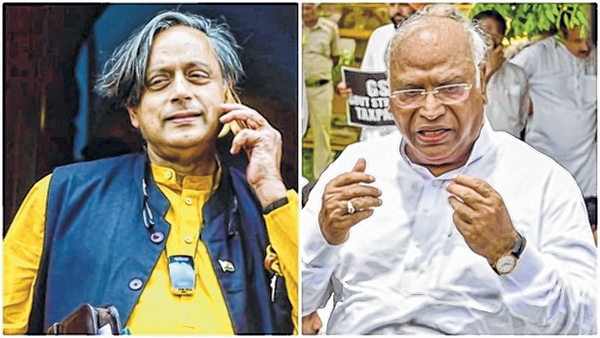 New Delhi, Oct 1
Former Jharkhand Minister K N Tripathi’s nomination for the Congress presidential poll was rejected on Saturday, AICC Central Election Authority chairman Madhusudan Mistry said. This sets the stage for the contest between senior Congress leaders Mallikarjun Kharge and Shashi Tharoor.
The three had filed their nominations on Friday, the last day for the process.
Mistry, addressing a press conference at the Congress headquarters in Delhi, said a total of 20 forms were received during the nomina- tion process, and four of them were rejected.
While the senior Dalit leader from Karnataka submitted 14 forms, Tharoor submitted five and Tripathi one.
The Jharkhand leader’s form was rejected as the signature of one of his propo- sers did not match and another proposer’s signature was repeated.
“Total of 20 forms were submitted yesterday. Of those, the scrutiny committee rejected 4 forms due to signature issues. There is time till October 8 for withdrawal, the picture would be clearer after that. If no one withdraws, the voting process will begin,” Mistry said, as quoted by ANI.
“The two current contenders for the post of Congress President include Mallikarjun Kharge and Shashi Tharoor,” he added.
Tharoor, following the nominations, on Friday said that it will be a “friendly contest” between the two.
“Delighted to learn that, following scrutiny, Mallik-arjun Kharge and I will be squaring off in the friendly contest for President of Congress. May the Party and all our colleagues benefit from this democratic process!” Tharoor tweeted.
Flanked by several Congress leaders, Kharge filed his nomination on Friday, with former Chief Minister Digvijaya Singh and Rajasthan Chief Minister Ashok Gehlot alongside him. They even proposed his nomination, as well as members of the G-23 camp – Anand Sharma, Bhupinder Hooda, Prithviraj Chavan and Manish Tewari.
Meanwhile, on Friday, Kharge had resigned as the Leader of Opposition in Rajya Sabha, in line with the party’s “one person, one post” norm announced in the ‘Chintan Shivir’ held in Udaipur in May.
The last day of withdrawal would be on October 8. Election, if any, will be on October 17, and results will be declared on October 19. More than 9,000 Pradesh Congress Committee (PCC) delegates will vote in the poll.
The last election for the Congress chief was held in 2002, and after 22 years, for the first time, a non-Gandhi member will hold the post. The Gandhis have chosen to stay neutral in the AICC chief elections, and have not endorsed any candidature. Financial Express