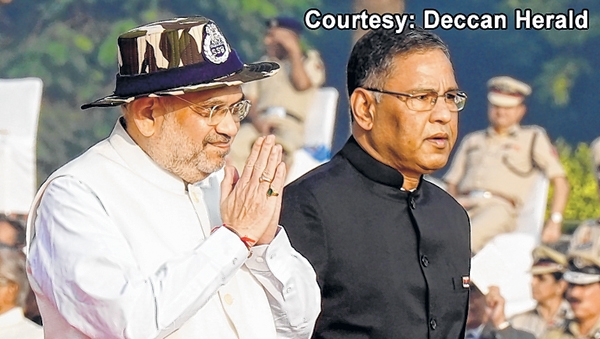 New Delhi, Oct 21
Union Home Minister Amit Shah on Friday said most of the “hotspots” in the country are almost free from anti-National activities now and the situation in major security theatres has improved over the last eight years of the Narendra Modi Government.
He said more than 70 per cent decline has been recorded in incidents of violence that were reported from insurgency-hit areas of the North East during this time period and this is an indicator of a “happy North East”.
Same was the situation in Jammu and Kashmir as well as in the States affected by Naxal violence, the Minister said while addressing top police and paramilitary forces commanders at the National Police Memorial in the Chanakyapuri area here on the occasion of the National Police Commemoration Day.
“Most of the hotspots are almost free from anti-National activities and this is a matter of great joy and satisfaction for all of us,” he said.
In the North Eastern States, Shah said, the Modi Government has removed the special powers given to the armed forces (under the AFSPA) and instead, accorded “special powers” to the youngsters of this region for their bright future.
The situation in Jammu and Kashmir is such that those who used to pelt stones earlier have now become “panches” and “sarpanches” (village-level elected public representatives) and were participating in the development of the region in a democratic manner, Shah added.
In the States affected by Left Wing Extremism (LWE) where many incidents of violence used to take place, the National anthem is being sung in ‘Eklavya’ schools created there and the National flag flutters on the homes in these areas, he added. Shah said India is proceeding on the path of development due to the “supreme sacrifice” made by more than 35,000 police and paramilitary personnel.
“I assure the families of these personnel that these sacrifices will not go in vain and I want to say that the country is moving forward because of this commitment of the police personnel,” he said.
Paying his tributes to these personnel, he said they played a leading role during the COVID-19 pandemic.
The Narendra Modi Government is committed for the welfare of these personnel and the Home Ministry has taken “proactive steps” and achieved “definite results” in three areas of ensuring better health care, enhancing housing satisfaction and humanising the duty roster of the Central Armed Police Forces (CAPF) troops, Shah said.
He said the housing satisfaction for CAPF jawans has increased from 37 per cent in 2014 to 48 per cent now and the Government aims to take it to 60 per cent over the next few years. Shah said the Ministry of Home Affairs (MHA) has distributed about 35 lakh cards under the Central health care scheme ‘Ayushman Bharat’ to the CAPF troops and their families and has reimbursed funds to the tune of Rs 20 crore till now to them. The National Police Commemoration Day is observed in the memory of 10 Central Reserve Police Force (CRPF) personnel who were killed on this day in 1959 in an ambush by Chinese troops in Ladakh’s Hot Spring area. Shah led the chiefs of various central police and intelligence organisations in paying floral tribute at the police memorial, a 30-feet tall and 238 tonne heavy black granite central sculpture honouring the troops killed in action. Intelligence Bureau Director Tapan Kumar Deka informed the gathering that a total of 264 police and CAPF personnel laid down their lives in the line of duty over the last year. Deka said 36,059 police and CAPF personnel have been killed in the country while rendering a variety of duties in the internal security duty domain.  PTI