Pulicat, the coastal trading centre since the 1st century 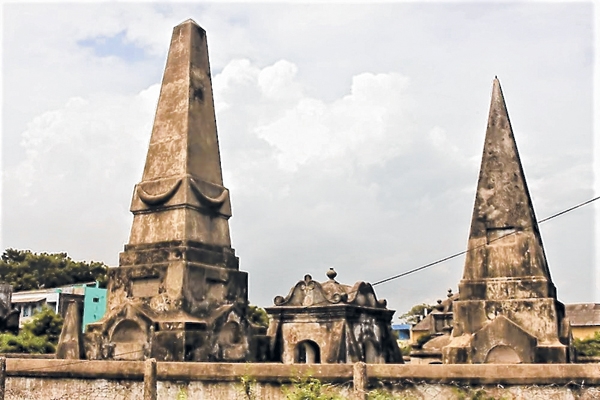 Pulicat near Chennai is famous for its lagoon, the 2nd largest in South Asia. But let us see about Pulicat Lagoon later in a separate article. Pulicat is also historically important because it was here that the first Dutch settlement in India was established in the early 1600.  Some 50 kms from Chennai, Pulicat’s original Tamil name is Pazhaverkadu (forest of the rooted fruit = mangrove forest); it was a key sea trading centre for many centuries. Podouke (Pulicat) is mentioned as one of the three ports on India’s east coast in the 1st century itself in “Periplus of the Erythraean Sea”, written by an anonymous mariner. Ptolemy mentions it as Podouke Emporion in the 2nd century.
The Europeans found the name tongue-twisting and it slowly changed to Pallaicata or Pallacatta in Anglo-Dutch accent and finally to Pulicat. Perhaps it was by accident that the Dutch came here; it is said that their ship got stuck and they drifted to the lagoon. Vegetable-dyed cotton fabric was the main export commodity from Pallaicata and this was what attracted the Europeans. The checked lungis exported from here were popularly known as Palayakat lungis and still remembered thus. The Portuguese had colonized Pulicat a century earlier than the Dutch in 1502 itself. The English (British) traders were to follow the Dutch. Pulicat being the cynosure of all the foreign traders, there were repeated clashes among these trading companies to establish themselves at this sea trading post.
The Dutch built a fort in Pallaicata (which was then under the Vjayanagar Empire) and named it Geldria/Geldaria in 1613 AD, their first and only fortification on Indian soil; their other positions were only trading posts. The fort is said to have been raised on the foundation of a Portuguese fort that existed there. The fort was the centre of their local government. In 1602 the Dutch had even established the world’s first joint stock company, the Dutch East India Company that operated from Pulicat; it was known by the Dutch abbreviation VOC. The Portuguese attempt to regain Pulicat from the Dutch did not succeed. But the Dutch had to give up Pulicat in 1781 due to the expansion of the Mughal Empire in South India and the tough competition from the British in the merchandise of cotton fabrics.  The British East India Company gave back Pulicat to the Dutch in 1785 but was again seized by the British in 1795; once more the British handed it back to the Dutch in 1818, only to be finally ceded to the British in 1825. Pulicat remained with the British until India’s independence in 1947. In the meanwhile, the British had established their first fort (St. George) in Madras (Chennai) in 1639.
As Madras thrived as the headquarters of the British East India Company, Pulicat lost its importance forever. It is now just a fishing hamlet with old remnants standing as testimony to its glorious trading past. The lagoon attracts migratory birds, flamingoes in particular.
When we visited Pulicat in 2014, Fort Geldria was in utter ruins, covered by trees & shrubs; archaeological digging was in progress. To its credit, this was the first fort in India that had gun powder making facilities as well! The trip was organized by AARDE Trust, a not-for-profit organisation involved in conservation of Pulicat Lagoon for sustainable living of fisher folk, and its heritage sites & values. It was a memorable & educative trip during the 375th anniversary of Madras Day celebrations. Their Pulicat Interpretation Centre (PIC) explains the historical and archaeological importance of Pazhaverkadu @ Pulicat with maps, old items/arte facts, photographs, etc.
The Dutch cemetery is considerably in good status, though needing attention in maintenance. It has a total of 76 tombstones dating from 1639 to 1850s. I found this place to be quite interesting as it had queer tombstones and beautiful sculptures and carvings. The tomb stones were carved and brought in all the way from the Netherlands. Only two  out of five old temples have retained their original character; in the Chola period (10th – 13th centuries), they were in a very bad condition. They are built of laterite stone with the tower in brick and mortar; as laterite is not found in Tamil Nadu, it is unique; but laerite is susceptible to weather conditions, especially the salty wind of the sea. Hope the two temples – one Vishnu and the other Shiva - will be restored to their old glory. There are two mosques – the big one and the small one. It is believed that the Arabs have had trade links with Pulicat since the 7th century. In the 13th century, a group of Arabs had migrated to Pulicat, differing with the Caliph there. The Big Jamia Mosque of the 17th century has pillars reflecting Hindu style; the Small Mosque was built in 1708.The Arab connection has led to the development of a new local language ‘Arwi’ (Tamil written in Arabic) that is still in use among the Pulicat Muslims. The Portuguese-built church of early 1500 was demolished to build a new church. Another old church is St. Antony’s.  Some Dutch era structures still exist; one such heritage building is used as a warehouse by the government hospital. Church street was eye-catching with the modern houses painted in bright, contrast colours. Old streets are lined up with houses of the past with the then prevailing structural style. The Dutch Government has shown interest in the conservation of Gelarida in Pallaicatta, their erstwhile first fort in India. A day’s trip to Pulicat was so rewarding.
Well, out of habit I picked up, like a rag picker, some broken pot shreds, porcelain pieces, stones, wood, etc., from among the ruins in Pulicat, despite my wife’s warnings. Never mind, one day she will realize how invaluable these pieces are when I carbon date them.
Pazhaverkadu, though tongue-twisting, is indeed a historical heritage hub!
The writer can be reached at [email protected] / 9840917608 Whatsapp