Govt may lift AFSPA in 4 States after Naga peace pact 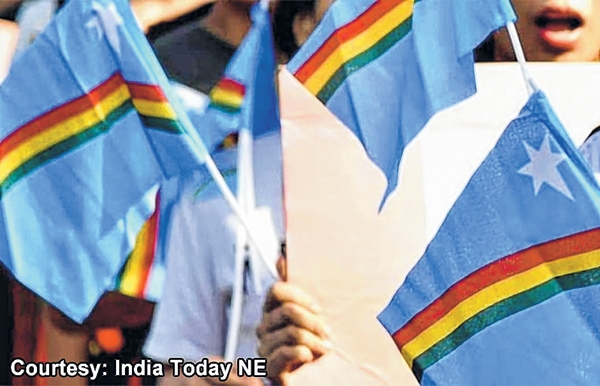 NEW DELHI, Oct 4
The uncertainty around the culmination of the Naga peace process is one of the reasons that led to the Armed Forces Special Powers Act (AFSPA) being retained in some parts of Assam, Manipur, Nagaland, and Arunachal Pradesh for another six months, according to Government officials.
The Home Ministry Response : The Ministry of Home Affairs (MHA) and State Governments had considerably reduced “disturbed areas” in Assam, Manipur, and Nagaland. The AFSPA was applicable in the whole of Nagaland and Assam till March 31. Under Section 3 of the Act, the State Governments and the MHA have concurrent powers to notify areas under the AFSPA. In Assam, the MHA was issuing the “disturbed area” order till 2017. Since then Assam has been renewing the notification every six months, the latest one issued on March 31. On September 30, the MHA extended the AFSPA in parts of Nagaland and Arunachal Pradesh for another six months.
About The Affected Area: The Act gives unbridled powers to the armed forces to kill anyone acting in contravention of law, arrest and search any premises without a warrant and protection from prosecution and legal suits without the Central Government’s sanction.,
“In Assam, the AFSPA has been retained in areas that are adjacent to the Nagaland border. In Nagaland, there is an ongoing peace process and once it has culminated, we will be able to further reduce the areas under the special Act,” GP Singh, Special Director General of Police, Assam said. The Centre is engaged in discussions with the National Socialist Council of Nagaland (Isak-Muivah) and seven Naga National Political Groups (NNPGs) to find a solution to the Naga political issue. The Isak-Muivah faction, the key player in the Naga peace talks, has been demanding a separate Constitution and a separate Flag for the Nagas and the creation of ‘Greater Nagaland’ or Nagalim by integrating Naga-dominated areas in neighbouring Assam, Manipur, and Arunachal Pradesh to unite 1.2 million Nagas.
Increase in Arrests: When the AFSPA was first revoked from 60% of Assam on April 1, the State in 2020 and 2021 witnessed a surge in the number of surrendered weapons and the number of militants who were arrested. In 2020 and 2021, the number of arrested militants stood at 146 and 216 respectively, while the weapons surrendered were 342 and 432 in the same period. Till September this year, 131 militants were arrested and 83 weapons were surrendered.
The officer said the special statutory power was removed as violence had come down and many militants were killed. He said the requirement of the AFSPA was no longer needed as the presence of the armed forces had dwindled in the State even before the forces had been moved to the northern border (Ladakh) to improve the situation. “When there is no Army, what is the point of continuing the AFSPA. Police have enough provisions under Code of Criminal Procedure,” Mr Singh said. India and China are engaged in a stand-off since April-May 2020 in Ladakh.
The Active Groups : He said the Paresh Baruah faction of the United Liberation Front of Assam (ULFA) was the only major militant group that was still active but they did not operate from Assamese soil. “The group has not been able to recruit any cadre in the past five-six months,” Mr Singh said. Paresh Baruah is said to be in Myanmar.
Mr Singh added that the turnaround period of infrastructure projects had improved in the past two years as the calls for extortion had come down. “If an area is free of insurgency, extortion is also over, automatically attracting investors. The projects are being completed faster. Previously they took longer as they used to wait for police protection and security ring to execute the work,” the officer added.
On September 15, Union Home Minister Amit Shah said it was the Government’s aim to resolve inter boundary disputes in the North East and strike a conciliation with all armed insurgent groups in the region before 2024. On May 10, the Minister said the AFSPA would soon be removed from all areas in Assam.
Breakthrough with Manipur : Echoing this, Manipur Chief Minister N Biren Singh said that after the revocation of the AFSPA from some parts of Manipur, 78 militants had joined the mainstream. He said most militant groups in the State had signed Suspension of Operations agreement with the Government.
“Biren 2.0 has seen the homecoming of 78 militants. The surrenders are a follow-up to Home Minister Amit Shah’s statement that not a single FIR [First Information Report] will be filed and not a single bullet will be fired if anyone wants to lay down arms,” Mr Singh said, adding that the State was attracting global investors now.
In Manipur which has 16 districts, 15 police stations in six districts were taken out of the periphery of the disturbed area. Earlier in 2004, the AFSPA was lifted from the municipal areas of Imphal. The areas where the AFSPA continued are adjacent to Nagaland or share international boundary with Myanmar.
In Arunachal Pradesh, Tirap, Changlang, and Longding districts and the areas falling within the jurisdiction of Namsai and Mahadevpur police stations in Namsai district of the State along the Assam border are declared as ‘disturbed area’.
Adda 24/7