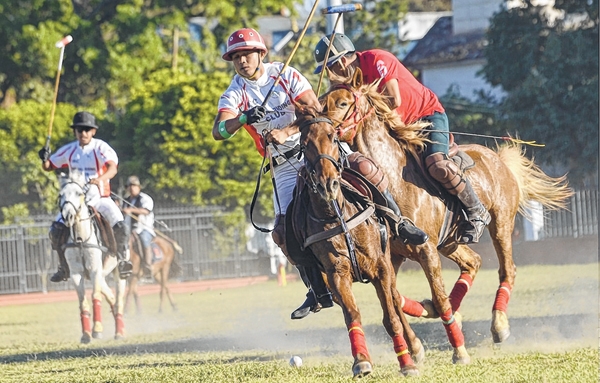 By Our Staff Reporter
IMPHAL, Nov 9 : Defending champions X-Polo Club, Wangkhei will lock horns with Tekcham Polo Club in the title clash of the 36th N Hazari and Dr N Tombi State Polo Tournament, 2022 being organised by Manipur Horse Riding and Polo Association at Mapal Kangjeibung.
X-Polo Club eased into the final with a 10-4 comfortable win against Chingkheihunba Polo Club, Kongpal today as P Ojit was in red hot form and struck 6 goals alone.
X-Polo Club were in driver's seat from the beginning and took a 6-2 lead till halfway as Th Jacob scored a goal each in the two chukkers and Ojit scored two each. O Rozer scored two of CHPC's goal in the first chukker.
The third chukker saw Ojit adding two of his last goals  and L Atangba adding one to make it 9-2.
L Kokeshwor scored the last goal for X-Polo Club in the final chukker before O Rozer and L Thomson scored a goal apiece for the losing team.
In the other semi-final match, Tekcham Polo Club clinched a 5-1 win over Imphal Riding Club-A, Lamphel to seal the other final ticket.
M Doren scored a goal each in the second and fourth chukker as K Jogendro scored another two in the third and the fourth chukkers and H Muhindro scored one in the third chukker to earn Tekcham Polo Club the final berth today.
The only goal for the Lamphel team was scored by Dollar Soram in the 6th minute of the third chukker.