"Death, be not proud, though some have called thee
Mighty and dreadful, for thou art not so;
For those whom thou think'st thou dost overthrow
Die not, poor death, nor yet canst thou kill me " (John Donne)
Rajendra Kshetri 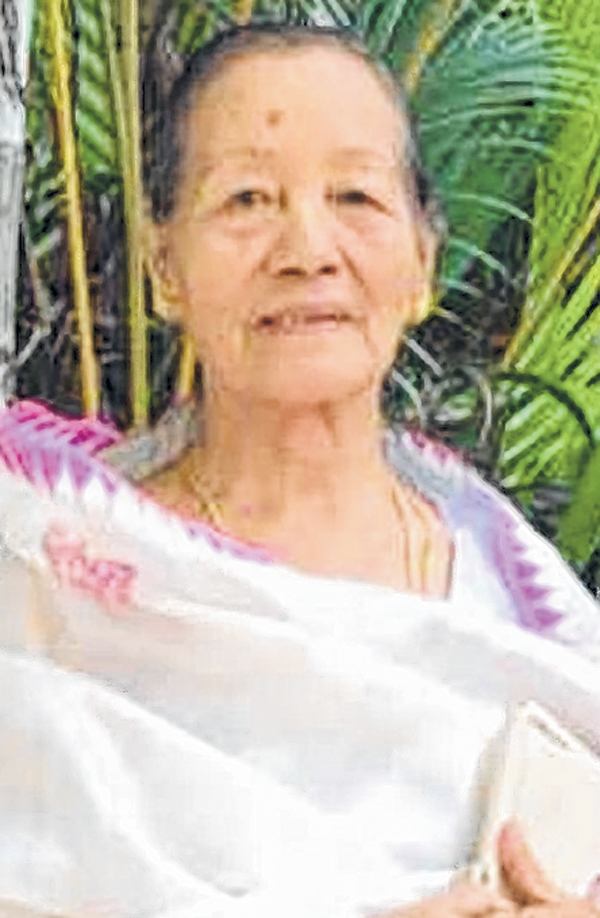 What do I write ? How do I write ? Why do I write ? Of a person. A teacher par excellence who inspired thousands of students. A Political Scientist to the core. A social scientist who left no stone unturned to make people aware of the importance of social sciences in society. A woman who has contributed so much to/for the cause of women's movement and been an intellectual force for Meira Paibis of Manipur. A humble person who was full of humility and gracefulness. And a wonderful sister too who has been a pillar of strength and inspiration to/for her siblings. A woman of substance. A woman of integrity.
Do I write as a fellow teacher ? A fellow social scientist for another ? An academic for a fellow academic ? A columnist for a fellow columnist ? An admirer of women ? A student for his teacher ? Or as a biological brother for his Dearest "ICHE" who has shaped and moulded the career of yours truly ? I am at a loss. Where and how do I begin ? And under what capacity ? But begin I must. Write I must.
Professor Kshetrimayum Bimola, my Eldest Sister, is no more. The Doyen of Political Science in Manipur left for her heavenly abode on 6th November 2022 leaving all of us in the family, her countless number of students, fellow teachers, friends and colleagues and hordes of admirers in a state of unbearable shock and grief.
A pioneering champion of women's empowerment in Manipur, an outstanding teacher of Political Science, she began her professional career as Assistant Professor at Centre for Post Graduate Studies, Imphal under Jawaharlal Nehru University, New Delhi (directly appointed by the First Vice-Chancellor of JNU, Shri Gopalaswami Parthasarathy, GP as he was known to all).
How she was so appointed is an interesting but little known episode in her eventful life but worth mentioning.
A First Class in MA Political Science from Gauhati University, she applied for the said post in time through Registered Post  from Singjamei sub post office. For some inexplicable reasons, she was not among the applicants called for the interview. When the matter was taken up with the University officials, it was found that her application didn't reach the office (it was later on revealed that it never reached). How an application sent by registered post didn't/never reached the addressee was beyond comprehension and unthinkable. Unless of course some foul play was/has been played at source. Be that it may, when her case was placed/explained/pleaded before/to the Vice-Chancellor, GP was all ears and sympathetic. I still remember vividly that evening when a Manipuri (Meetei) gentleman, presumably coming from Delhi, came to our house and handed over in person the Appointment Letter to my sister. That moment, happiest moment of my sister (and entire family) brought her tears of joy and something else. Was that something else a feeling/sense of vindication ? I didn't know then. Now I think I know.
From Assistant Professor to Associate Professor to Professor, Prof. Bimola served as Head of the Political Science Department, MU for several terms. She left no stone unturned to build, nourish and nurture the department to become one of the most popular and sought after departments at Manipur University. Her contributions to the department since its inception is immense and colossal. She inspired students, colleagues and fellow teachers to no end. She was the Fountainhead for/in the department.
Many Firsts adorned Prof. Bimola's glittering curriculum vitae. Not only was she the First Woman Professor, she was also the First Woman Member of Syndicate, MU (as nominee of the Governor of Manipur), First Woman Dean (Academic) MU, and First Woman Vice-Chancellor (in-charge). Always a helping hand to the welfare of the working women in Manipur University, she initiated to form an association. Thus was born Manipur University Working Women's Association (MUWWA) with Prof Bimola as its founding President.
A teacher and researcher by choice, Prof. Bimola was a bankable friend, an inspiring Guide, Mentor and Philosopher to tens of thousands of her students and (several) colleagues alike. She treated all her students equal irrespective of caste, creed, gender, region and religion. A teacher to the core and a passionate researcher, she also served as, among many others,  President of Manipur University Teachers Association (MUTA); Social Science Research Association, Manipur; Co-ordinator, Center for Gandhian Studies; Centre for Peace Education, Manipur; Centre for Human Rights and Education, MU. She also served as Vice-President of North East Political Science Association.
The passing away of Prof Bimola is an immeasurable loss for/to the world of academic community in the State and the students of Political Science in particular. She has left an indelible mark. A legacy for generations to come.
Forty one years ago, my mother left me heartbroken and almost orphaned. Now, my "Iche", Dearest Iche, mother-figure to all her eight siblings, has left me. Heartbroken again. And shattered.
If to be born again, I pray Oh God, I be reborn as her brother. Again.
* Dr Rajendra Kshetri is Professor of Sociology at Manipur University, Imphal.