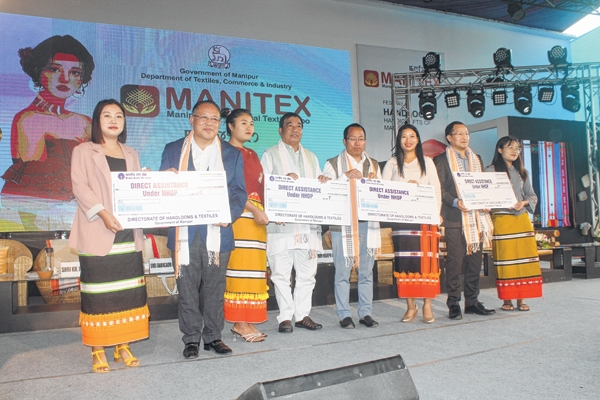 By Our Staff Reporter
IMPHAL, Nov 13 : Minister for Water Resource and Relief & Disaster Management, Awangbow Newmai graced the Tamenglong and Noney Day at the ongoing Manipur International Textile Expo (MANITEX) today at Urban Haat, Nilakuthi.
Speaking as the chief guest of the event, the Minister said that Manipur is a very beautiful State in terms of culture and people also.
“We can proudly say that we produce the best in handicrafts & handloom products among the Indian States,” he said.
Some years ago, Manipur was in turmoil and unable to provide opportunities to its talented youths, many went outside the State and abroad to pursue their dreams and career. People were afraid of venturing out after sunset. However, now under Chief Minister N Biren Singh, Manipur has seen lots of positive changes and development. Peace has returned and relations between the hills and the valley people have been fostered, he said, thanking the Chief Minister.
The Minister continued that if Manipur was going at the present pace in the last 40 years, she would have become one of the most developed India States today.
Through MANITEX, the weavers and artisans of the State have been given a new hope, and by promoting them, the State's economy could improve, he said.
He appreciated the Directorate of Handloom & Textiles and all the participants at the MANITEX.
HAC Chairman MLA Dipu Gangmei, Manipur Handloom & Handicrafts Development Corporation Ltd Chairman Kh Ibomcha and DC Noney Joseph Pauline graced the event as president and guest of honour respectively.
As part of the event, the presidium members presented financial assistance to weavers under the National Handloom Development programme.
Fashion and cultural shows promoting traditional and cultural attires were organised.