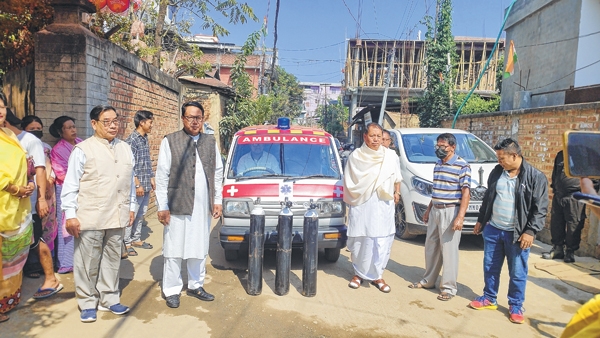 By Our Staff Reporter
IMPHAL, Nov 13: Uripok Constituency MLA Khwairakpam Raghumani Singh has launched Uripok MLA Ambulance Service in a bid to help out those in need of aid.
The ambulance service was launched at a function held at the residence of the MLA located at Uripok Sorbon Thingel today.
Speaking on the occasion, Khwairakpam Raghumani Singh informed that for the first three months, the ambulance will only provide day time service. However, night time service will be launched after the end of the first three months.
The ambulance service will be operated by Semlasi Uripok Medical Team and this team can be reached via phone number 9362084113. This valuable ambulance service will be available to the people of this Constituency at a minimal charge of Rs 50, the MLA informed.
Khwairakpam Raghumani went on to say that transporting a sick patient in a private vehicle poses a lot of problems. One of them is the high volume of traffic in Imphal city and others include lack of emergency medical care that might be essential in certain dire cases. For these reasons, an ambulance provides the best mode of transporting a patient.
He also highlighted the inconveniences of hiring private ambulances stating that they charge anywhere between Rs 1500 to Rs 2000.
As such, the ambulance service was launched with the objective of alleviating some of the problems faced by ailing residents of Uripok Constituency, he said.
Stressing on the growing importance of the health sector in India, the MLA mentioned several schemes launched by the Central Government in this regard including PMJAY, Ayushman Bharat and CMHT in case of Manipur Government.
In recognition of all these health initiatives undertaken for the people, the MLA asserted that he wanted to do his bit as an MLA by launching the ambulance service.
The MLA also pointed out that free coaching classes for Class X students of Uripok AC are also being conducted at Ibotonsana Higher Secondary School and at Iroisemba.
All these initiatives have been launched to address the prime concerns of social upliftment, education and health sector etc in Uripok AC, Kh Raghumani concluded.