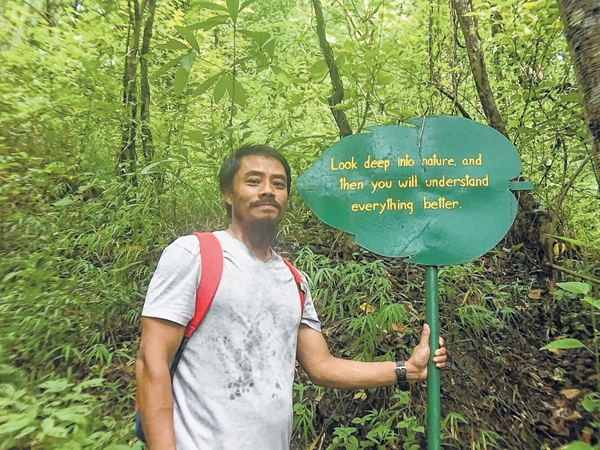 IMPHAL, Nov 13
A 47-year-old man in Manipur’s Imphal West district has converted barren land into a 300-acre forest with a wide variety of plant species in 20 years.
Moirangthem Loiya, who hails from Uripok Khaidem Leikai area of the district, started planting trees on the outskirts of Imphal town in the Langol Hill range about 20 years ago.
A nature lover from his childhood days, Loiya told PTI, “in early 2000, after completing my college studies from Chennai, when I went to the Koubru mountain, I was appalled by the wide scale deforestation of the previously thick vegetation that marked the Koubru hill ranges. I felt a strong urge to give back to mother nature what we humans as a whole have destroyed so much in modern times.”
The search soon led him to Maru Langol renamed “Punshilok Maru” or “Spring of Life” in the Langol Hill range on the outskirts of capital Imphal town.
“I encountered the place accidentally while taking a hike and immediately felt the area which was all barren due to jhum cultivation could be converted into a thick green lush forest with time and dedication,” the 47-year-old told PTI.
“The site served as a home for me for six years, as I lived in isolation in a hut which I had constructed myself, planting bamboo, oak, jackfruit trees and teaks while nurturing the area previously destroyed by human activities” Loiya who now stays “on and off” at the forest said.
“I would purchase saplings from my own pocket and plant it whenever possible,” Loiya said, adding “the plantation is done mostly ahead of the monsoon season and vegetative growth was always quick.”
“Periodic illegal wildlife hunting for deers, mostly for sports, is another problem we generally face,” Loiya who established Wild Life and Habitat Protection Society (WAHPS) said. The society is devoted to preserving the Punshilok forest and fighting off illegal hunting and wildfires.
The state forest officials have been supportive of the endeavour of Loiya in planting trees in the Longol hill range.
There are more than 100 species of plants, around 25 varieties of bamboo species in the 300 acre forest, which also has barking deers, porcupines and snakes, forest officials said.
The officials said the land was barren some 20 years ago.
Forest officials said that most of the wildfires spread as people want a piece of land either for cultivation or any other activity.
Meanwhile, Loiya is certain that the task of growing a forest and nurturing it is going to be “a lifelong mission” although he now works in a pharmacy to earn a living and to sustain his family.
Loiya is currently preparing to organise a camp for volunteers this November so as to protect the forest from wildfire ahead of the dry season. During the camp, a fireline will be created along the periphery of the forest, so that wildfires cannot cross into the forest section, he added. Press Trust of India