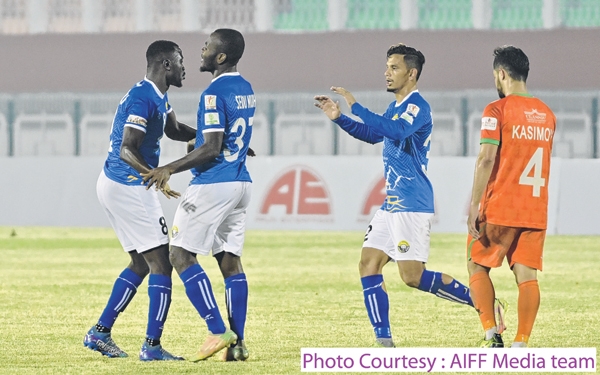 Imphal, Nov 13
Real Kashmir FC began the I-League season on a winning note, beating hosts Neroca FC 1-0 here on Sunday.
It was Issahak Nuhu's excellent 53rd minute strike that sealed all three points for new head coach Mehrajuddin Wadoo's team.
The first half of the match at Khuman Lampak Stadium was dominated by the Kashmir side and Neroca FC were slow to get off the blocks.
Despite RKFC's intent, the deadlock could not be broken and the scoreline remained 0-0 at half time.  RKFC's efforts, though, were rewarded a few minutes into the second half, with Nuhu finding the back of the net off a Yakubu Wadudu cross.
"We are very happy with our performance today. We have a new coach (former India player Mehrajuddin Wadoo) this time and we are looking forward to our upcoming home games. We will look to better our performance going ahead," said Real Kashmir FC owner Sandeep Chattoo after the win.
Real Kashmir had the first chance of the match, when Jerry Hmar broke down the left and tried his luck from outside the box, but the ball sailed over the cross-bar.
NEROCA's Uzbek midfielder Sardor Jakhonov remained influential through the first half proceedings, acting as a fulcrum from deep in the middle of the park, something that greatly helped the hosts retain the ball for long periods of the game.
For all their possession, though, NEROCA did not pose many serious threats to the Real Kashmir goal, that was guarded by veteran keeper Subhasish Roy Chowdhury.
Nuhu, on the other hand, looked dangerous for the visitors, and got close to scoring near the half hour mark. As the Ghanaian shrugged off his marker at the edge of the NEROCA area, he tried his luck with a snap shot, but it was straight at goalkeeper Soram Poirei.
Changing over, Real Kashmir came out with a lot of attacking intent, and they nearly prised open the NEROCA defence, when Davinder Singh skipped past his marker on the right near the corner line, cut into the box, and sent in a low cut-back to Nozim Babadzhanov, who slipped his shot inches wide. A similar ploy a couple of minutes later, finally bore fruit for Real Kashmir, as Ghanaian midfielder Wadudu Yakubu broke unmarked into the NEROCA box from the right and sent in a hard, low cross that was smashed in by Nuhu.
As the evening wore on, NEROCA's Ronaldo Fletcher grew into the game, often dropping deep to help his side create chances. The Jamaican forward pulled the trigger with a little over 10 minutes of regulation time left, but the effort was blocked by the Real Kashmir defence.
Captain David Simbo arguably had the best chance of the match for NEROCA, as an injury time corner by Fletcher was aimed straight at the former at the near post. However, he mistimed his header, which rolled harmlessly into the goalkeeper's hands.         PTI