CAA implementation in North East should not be a problem for Centre, says MoS RK Ranjan 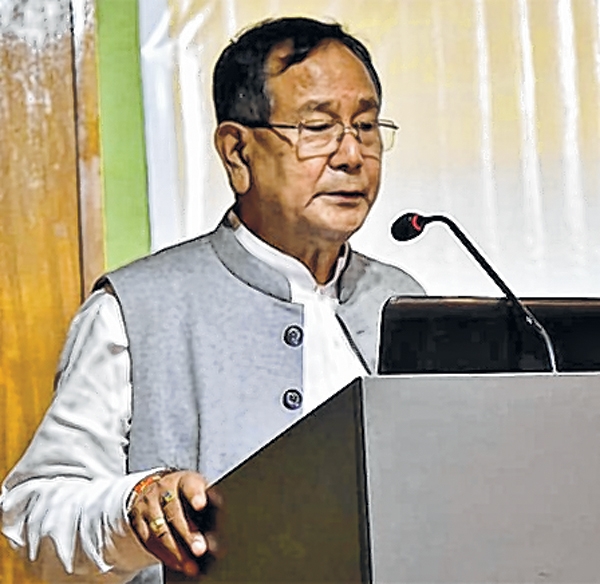 Kolkata, Nov 12
Minister of State For External Affairs Rajkumar Ranjan Singh on Friday while lauding India’s Atmanirbhar Bharat approach, said that the implementation of the Citizen Citizenship (Amendment) Act 2019 in the Nation specially North East should not be a problem for the Centre.
He stressed that the identity of the people should be addressed on the apt forum.
Speaking to ANI, Singh said, “The inner line permit and CAA should not be a problem in the Nation, specially in North East India and West Bengal. This is the era of FDI (Foreign Direct Investment). We are trying to get to the USD 5 trillion economy. We also depend on the Aatmanirbhar Bharat and Vocal for Local. This is the unique character and approach based on Mahatma Gandhi’s rural economy and self-reliance. The miniature identity should be addressed on the proper forum and so we should not be stuck to that.”
When asked if the implementation of CAA in the North East and West Bengal would be a challenge for the Centre, the Minister said that the issues pertaining to it should be regulated through the rules and regulations.
“There are certain issues in North East India and West Bengal. That has to be regulated through the rules and regulations,” he said.
Seeking support for the CAA in West Bengal as against the stand of the State Government on the issue, Singh said that the opposition by the Mamata Govern- ment to the implementation of the legislation in the State is a “political issue”.
“These are the political issues. If we have the totality of National feelings, they should support the Government of India,” he said.
The Minister, responding to a question on the smuggling incidents reported on the border areas along Bangladesh, said that India wants to have good relations with the neighbours.
“We want to have good relations with our neighbours. The principle of our foreign policy is first to the neighbourhood. We helped the neighbouring countries a lot during the COVID times. Under the leadership of PM Modi, we are trying to reconnect the ancient roots with modern technology and modern trade. We are following the United Nations principles.
We are sticking to that,” he said.
Talking about the special treatment given by PM Modi to the Northeast, the Minister said that he has expressed his aspirations to make NE India a “new engine for growth” of the Nation.
“Earlier, the whole of Northeast India was treated as insurgency prone and development was not feasible. That kind of status was given. But after 2014, PM Modi took Northeast India in special attention and also he very frequently expressed his aspirations that northeast India is a new engine for the growth of the Nation. More than 250 ethnic communities are settled in NE India. We have over 250 dialects. Along with that, we have a huge indigenous knowledge system,” he said.
“Because of different terrains and landscapes, our bioresources are also different. That’s why NE India is the confluence zone for Southeast Asian species and cultural migration. We are not able to assess and tap the potential of NE India properly. However, PM Modi knows about all these potentials, which is why he has given a special thrust to NE India. And also, he transformed NE India from the concept of landlock to the land linked to the neighbouring and beyond our neighbour,” Singh added.
The Minister also highlighted the Government’s efforts towards minimising the language barrier faced by the people of the NE and said that the Government has undertaken New Education Policy 2020 which aims at promoting learning in one’s mother tongue.
“In NEP 2020, we have the promotion of the own mother tongue in the lower level course of education. We hope that the language barrier can be solved,” he said.
ANI