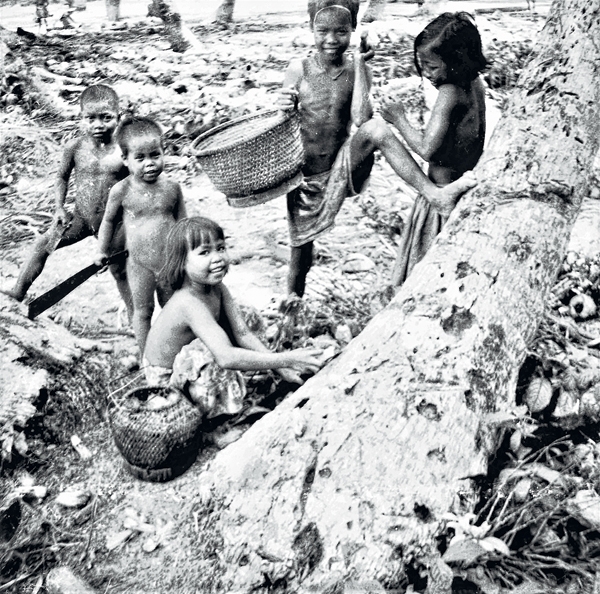 S Balakrishnan
On Children’s Day, I fondly remember my ‘friendly’ encounter with some Holchu kids. Holchu in Nicobari language is ‘friend’.  The Nicobarese people have had friendly relations with foreign sailors unlike their Andaman counterparts who shot arrows at the sight of foreigners. Hence the Nicobaris are called ‘Holchu’ (friend)..
My friendly encounter with Holchu kids happened in 1979 during a stopover of the inter-island ship. I was sailing towards Great Nicobar Island, India’s southernmost land mass, with a determination to touch India’s real southernmost tip; this Point is now called Indira Point, but was known as Parsons Pygmalion Point then.  Sailing from Port Blair in April, before the monsoon started, Car Nicobar Island was the second stopover after Little Andaman. My touchdown at Car Nicobar was a hurried and harried one,  because I was scared that the ferry ‘Onge’ could leave without me. So, even as I roamed in Car Nicobar, I tried to be as close as possible to the coast, with an eye on the ferry.
As I was walking and enjoying the sights and sounds of that beautiful island, I reached  Perka village. There I noticed a gang of Holchu kids in a coconut grove. Oh, well, wherever you turn it is coconut and nothing but coconut in Car Nicobar - you can as well call it Coconut Island. That is how it looked as the ferry chugged towards it in the morning.  The kids were busy cracking some nuts and eating them. A girl from that naughty gang offered me a nut. It tasted nice! Being the eldest, she seemed to be the gang leader. They called it ‘doring’ nut. They had with them intricately woven mat baskets. Two little boys were in birthday suit! But what I remember now after 43 years is not the taste of the doring nut but the ‘friendly’ approach of the ‘Holchu’ kids, their innocent giggle, carefree lifestyle and hospitality. Beautiful memories never fade!
The writer can be reached at [email protected] / 9840917608 Whatsapp