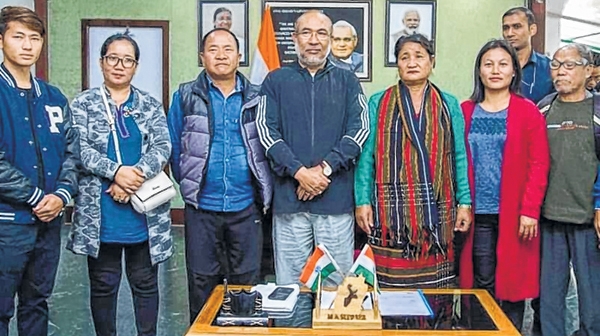 By Our Staff Reporter
IMPHAL, Nov 14: Chief Minister N Biren today presided a review meeting of the preparations being made for Manipur Sangai Festival 2022 which starts from November 21.
The festival aimed at promoting the State’s tourism potential would be held at 12 venues till November 30.
The review meeting held at the Chief Minister’s Secretariat was also attended by  villagers of Behiang and Geljang who are members of the Sangai Festival Organising Committee.
Together with the Government’s representatives, the villagers discussed about hosting the festival successfully at their respective villages, sources informed.
The Chief Minister also discussed about conservation of Manipuri pony and maintenance of pony breeding firms with representatives of the Manipur Horse Riding and Polo Association.
The State Government’s plan to introduce a mounted unit of Manipur Police who would use pony too figured at the meeting, said the sources.
Apart from constructing a 120 feet high polo statue atop the Heingang Hills at the premises of Ibudhou Marjing, the State Government has also been planning to develop a polo field, a race course and a grazing ground for ponies.
Meanwhile, the Chief Minister presented monetary rewards to the chiefs of eight villages which are located within Singnat sub-division in Churachandpur district for successfully switching to alternative crops from poppy cultivation.